This is just too cute![1] Putter the squirrel has become the mascot of an ice cream parlor in North Carolina. Scott and Pam Matin adore her. She originally came to them and stole an ice cream cone… since then, Fantasy Isle Ice Cream shop has made a special ice cream cone just for Putter. You can call her and she’ll come to get it and either eat it on the railing or take it up her tree. She also plays with the kids and the balls on the miniature golf course.

Putter loves vanilla ice cream the best. She’s friendly as all get out. She’s been a regular now since last summer and the couple feels blessed to have her as their mascot. Little kids come in asking for Putter… she’s a big attraction there. But being a star hasn’t gone to her furry little head. She’s in this for the sweet, sugary goodness of the ice cream. That’s my kind of squirrel. 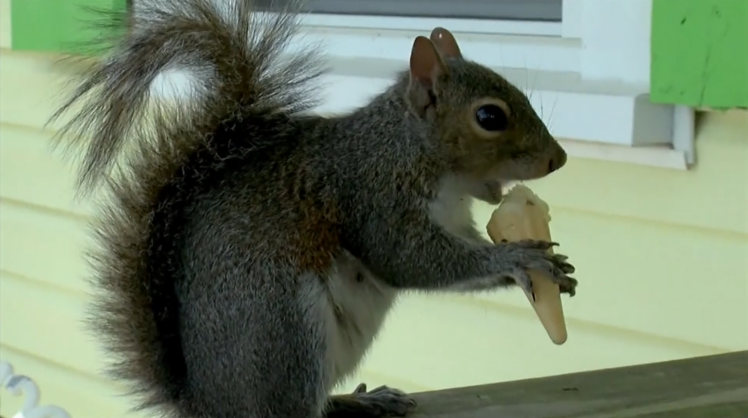 Scott and Pam Martin who own Fantasy Isle Ice Cream shop in North Carolina give the animal a tiny cone when it comes to visit.

The couple have sort of adopted the squirrel as their unofficial mascot.

They say she seems to love vanilla ice cream the most and she’s even learned to come when her name is called.

Mr Martin said: ‘She came down and just got friendly with customers and ultimately took one’s ice cream cone back up the tree.’

His wife Pam added: ‘You can call her name and she literally will come out of her nest from one of these big trees and hop her way down to the roof ultimately to the rail and waits on her cone.’

Putter the squirrel has been showing up since last summer at the Martins’ Holden Beach ice cream shop and mini golf course.

The Martins quickly grew to like her, giving her the nickname Putter, and say she’s a real hit with customers.

Regulars always ask for the squirrel and she will run around their mini golf course watching people play.

They now make individual squirrel-sized ice cream cones for their eight-inch-tall friend. Scott said: “She came down and just got friendly with customers and ultimately took a woman’s ice cream cone back up the tree. You can call her name, and she’ll literally come out of her nest in one of these big trees and hop her way down, and waits on her cone. She’s quite a little character. She actually plays golf with the kids, she’ll run around the golf course.”

A sign outside[3] the shop asks customers not to feed Putter themselves because of her daily dose of two ice creams a day from the staff is ‘probably enough for a little squirrel like me’. Just adorable. 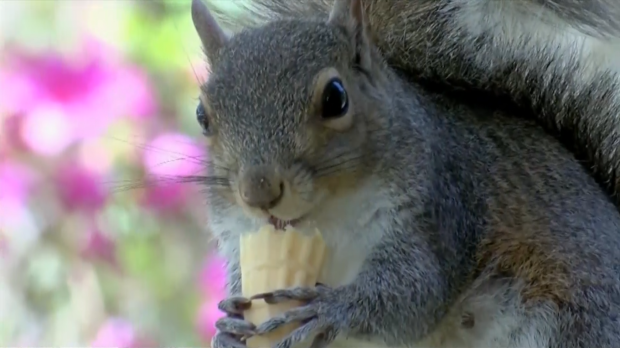 Vanilla is her favourite (Picture: WWAY)