It seems folks in other countries tend to have dashboard cameras more often than we in America do. In Russia, for example, dashcams are standard fare, largely because car insurance there is a mostly foreign concept and the only way to ensure you won’t get victimized with scam lawsuits for fender-benders and the like is video proof.

We don’t know whether that’s similarly true of Wales, though across the UK folks are buying dashcams[1] in hopes of having a positive effect on their car insurance rates, but what we do know is here’s a Welshman with a dashcam who recorded himself getting into a wreck with a flying car[2]. 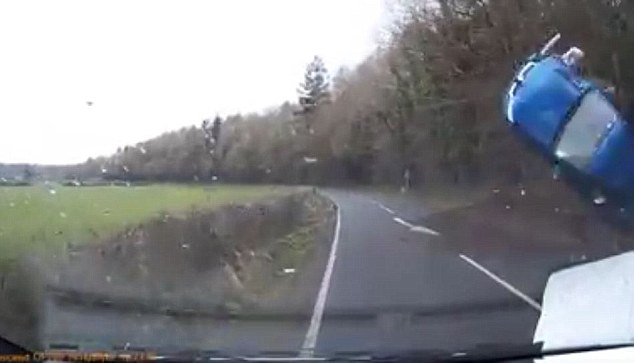 This is the terrifying moment a car flips into the air, somersaults twice and crashes down onto an oncoming vehicle.

Despite the colossal damage, the female driver escaped with only minor injuries after losing control of her car and off the road in Wales.

The shocking footage, captured by Norman Drinkwater’s dashcam, shows the vehicle veer into his path and up an embankment, spinning upside down, then smashing into the side of his car.

The video is scary stuff…

Only minor injuries from that crash, in that tiny car, is a miracle. And Mr. Drinkwater’s dashcam came in handy not just to give us something to talk about, but to protect him from any liability for that crash – otherwise you never know what a jury or a judge in a civil trial would do.