Video: Watch a Chimp Take Down a Camera Drone with a Stick

Good for that chimp[1]. The majority of humans can relate and agree with that action. The drone got too close to a female chimp who viewed it as an enemy or predator (and rightly so). She proceeded to knock it out of the air with a stick. Then a group of the chimps descended on the drone and took it apart. Maybe those trying to get closeups of the primates will learn to keep their drones and cameras a bit higher and further away. Unless of course they like replacing their intrusive drones. 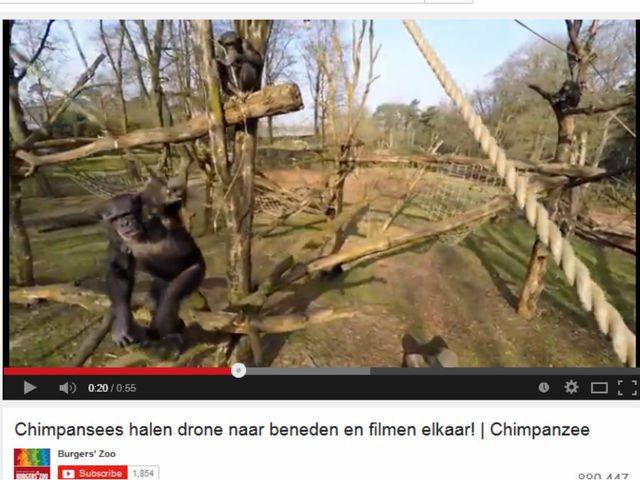 King Kong’s got nothing on her.

A chimp being filmed by a drone for a television show based out of a zoo in the Netherlands decided she wasn’t too keen on the invasion of privacy and swatted the drone from the sky, but the finished film was “special” nonetheless, according to the zoo.

When a drone hovered over the chimpanzee exhibit at Burger’s Zoo, while filming “Burgers’ Zoo Natuurlijk” Friday, “the intelligent primates immediately discovered the spying little plane and right away armed themselves with long sticks against this inquisitive electronic intruder,” the zoo’s website said.

The drone got a little too close to a female chimp, who happened to be perched on a tree, and she used her branch to knock the drone from the sky, at which point “the group of primates quickly overpowered the ‘prey,'” the zoo said.

One of the chimps that took part in disassembling the drone got a hold of the camera and captured a video selfie.

“Despite the completely destroyed drone this still provided some very special images,” the zoo said.

This happened at Burgers’ Zoo in the Netherlands, where I’m sure they figured they would get footage for a documentary. But when you intrude on the chimps’ habitat – their home – they don’t take kindly to that and they can be ferocious. They may have been curious, but I believe that instinct dictates defense of the habitat and the drone was viewed as an enemy interloper. Thus, a big stick was used to swat it to the ground where it was disassembled by the chimps. The camera survived and a chimp got a really good selfie taken. Swatting drones… sounds like a cool new sport.