When Matthew Duncan found a couple of spiders in his house, he captured both and put them into a Tupperware container. The two spiders began to fight — only for one of the spiders to explode with baby spiders! 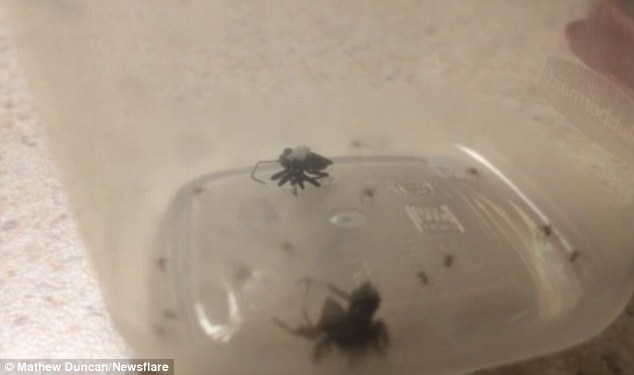 An Oct. 3 video captured by YouTube user Mathew Duncan features a violent showdown between two spiders — and shows what looks like a couple dozen babies exploding from the spider under attack. It’s worth the (very creepy) watch.

Dr. Leonard Vincent, an entomologist and arachnid expert at Fullerton College in California, identified the “exploding” spider as a wolf spider.

“Female members of this family have their eggs sac attached to their spinnerets,” Vincent told The Huffington Post in an email, referring to the spiders’ silk-spinning organs. “Where the adult female goes, so does the egg sac.”

Duncan said that he didn’t know that one of the spiders was pregnant. And while the exploding baby spiders was a cool trick, it unfortunately didn’t help the spider — he said that the other spider killed the wolf spider, and then ate all of her babies.