WATCH: Here is What the Awesome Mother That Slapped the Stuffing Out of Her Son Had to Say About Why She Did It!

Baltimore Police were pleading with parents to bring home their children, as many of them were participating in the riots. It’s a sad statement on what kind of parents these kids must have had, but one mom wasn’t having it and flipped out on her son — and now she’s speaking out to explain why. 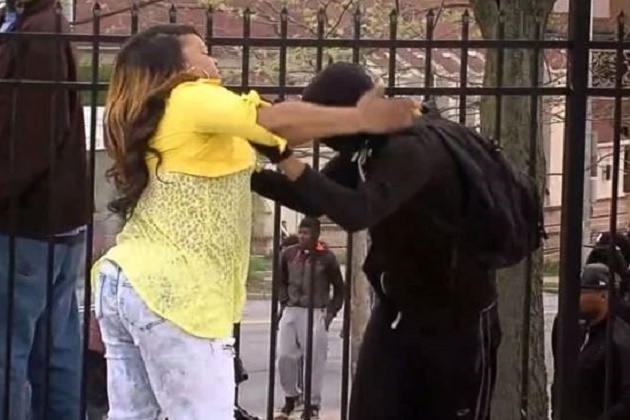 Toya Graham pulled her kid from a crowd of rioters, many of whom were teenagers that were setting fire to cars and throwing stones at police in Baltimore on Monday evening. As onlookers filmed, Graham angrily scolded and slapped her son, following him as he tried to walk away.

The Baltimore mother who publicly berated her son for rioting in a now-viral video said she did it because she doesn’t want her only son to be “a Freddie Gray.”

But Graham told CBS News in a partial interview released Tuesday that she mentally blocked out all of the cameras. Her focus was getting her message through to her son, she said.

This woman has been applauded around the country, and rightly so. Whatever led up to her son choosing to join these riots really doesn’t matter — this woman stood up, took responsibility, and was a good parent. If only more parents would do the same.