Joy Behar VS Meghan McCain is the only reason to watch The View.

The show that aired this afternoon was all about how Joy, 75, needs a civics lesson, or at least some humility to treat the senility.

To start, Whoopi Goldberg opened by talking about a recent interview she had with Sen. John McCain, whose daughter Meghan, 33, represents the soft conservative side of The View’s panel. Whoopi said, “We love John McCain. We do… he says he felt it was a mistake for [Hillary Clinton] to write [her book, What Happened] so soon after she lost and that he learned after his loss [to Barack Obama] that the hardest thing to do is just shut up.”

Joy’s response started with an “all due respect to your father,” but he said that he is wrong and that Hillary’s place — like any woman’s place — is in “the resistance,” saying that, “The woman won the election.”

As a female with a MAGA hat collection (and a Make Christmas Great Again sweater ready to go for December), I’m tired of the dismissiveness of female support for Trump. And so is Meghan, because she said:

She went in for the kill, saying: “The electoral college you live and die by and I will say losing the presidency is a unique experience.” Joy responded “I know my civis, Meghan.”

Her response continued and she explained how she prayed on the night of her father’s loss, saying that their whole family recognized that Barack Obama had won. 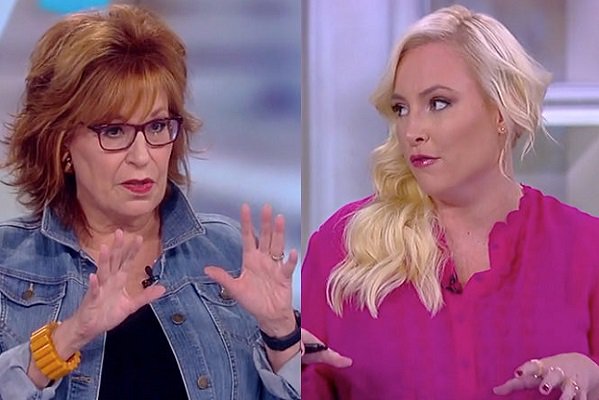 This is the second time this week we’ve had to cover Joy. She popped up on the Morning Joe show to plug her new stupid book about “Surviving Trump World,” saying that she was pushing her book because, “I’m being told by God to save this country.”

Earlier this month Joy tried to defend Al Franken by placing all the blame for the allegations on the very existence of Donald Trump, but thank God for Meghan McCain. The first woman to accuse Rep. Franken of sexual harassment was radio host Leeann Tweeden, who on her ninth tour entertaining the troops with the USO was photographed being groped by the comedian, now politician. Franken responded that he doesn’t remember things the same way and that the photo was “intended to be funny, but wasn’t.” Joy said: “What about Trump, his people are saying that those women who accused him are liars![3]” and Meghan snapped back by saying, “Oh my God, this isn’t about Trump right now though! This is serious! I know [Leeann]!”

You can watch the video here, starting at the beginning: