Woman Exited Car During a Safari Ride, That Was the Last Breath She Took [VIDEO]

When people drive through an area where there are wild animals roaming freely, it’s usually advised to not exit your vehicle. But when some of the people in one car got into an argument, one woman got out of the car… and was attacked by a tiger. 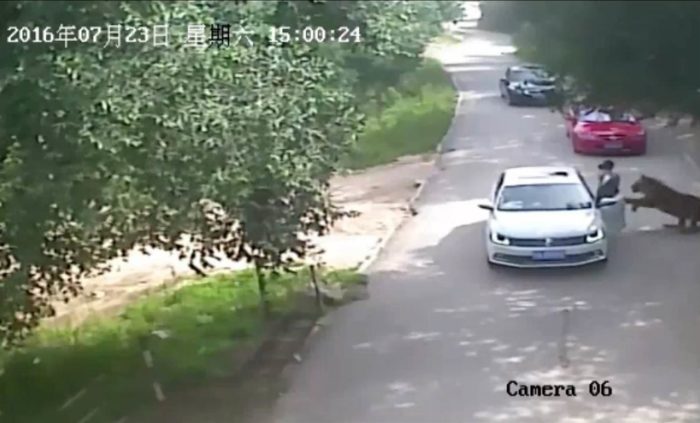 Tigers have killed one woman and injured another at a wildlife park in Beijing, after the pair left their car inside a safari-style attraction.

Chinese news reports said the incident occurred when one of the women left the vehicle following an argument with another passenger.

CCTV footage of the attack showed a tiger approached the woman only 15 seconds after she left the car.

It then attacked her and dragged her off, prompting the second woman to leave the vehicle in an attempt to help.

Another tiger mauled her to death, before carrying off her body.

The two women were accompanied by a man — who aided the rescue attempt — and a small child, who were uninjured, reports said, adding that the park had been ordered to close for “rectification”.

What a horrific tragedy. Obviously, the woman should never have left the car, but it was a momentary mistake. Before people judge her too harshly, they should think about how many mistakes they make every single day, and be grateful that none of them resulted in death.