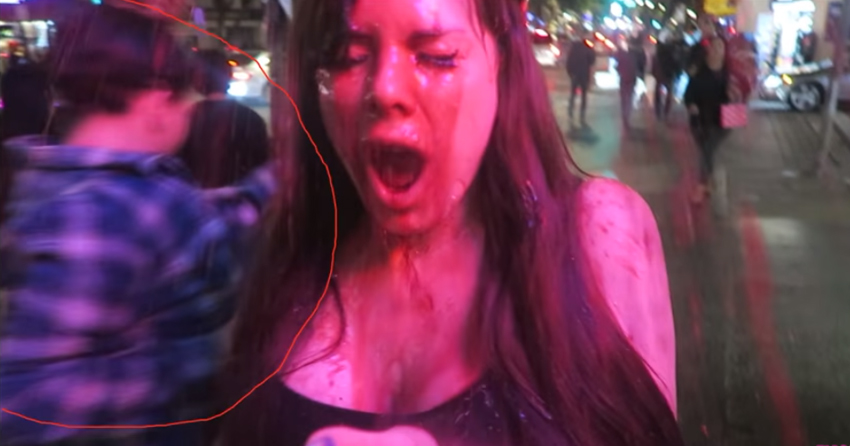 Blaire White, a popular YouTuber who has made inroads with liberals and conservatives due to her approach to her own transgender status, is clearly not very popular with the left-wing nutjobs in Hollywood. Her past denunciations that “allowing children to transition [to another gender] is child abuse” and that it is wrong to allow kids to “take drugs that permanently alter their body” has attracted negative attention from the far left in the past, but it’s nothing compared to her recent experiment of walking around Hollywood sporting a MAGA hat.

In a tweet posting the video, she added after that, “By the way, I’d like to make it clear that the experiment was simply to wear the hat in public. We didn’t do anything remotely inflammatory or investigative. We didn’t even really speak to them.”

So far, the tweet containing a link to the video posted earlier this week has gotten over 5,000 retweets and the six-minute video itself, shot by Blaire’s boyfriend, has over 338,000 views.

Yesterday, we posted a link to a recent monologue by Judge Jeanine Pirro describing that to be a Trump supporter (or apparently, simply wearing a MAGA hat) is becoming much more dangerous as the left is willing to suspend justice and legal due process in order to directly “use violence” against people that they find to be offensive or arm themselves in an ongoing effort to normalize violence as long as they disagree with the person. Again, Blaire was just plain wearing the hat in Hollywood, not out there yelling about Luther Strange VS Roy Moore or brandishing documents alleging that she has proof that Hillary Clinton was involved in the murder of Seth Rich.

The left’s “outright attempt at anarchy”[3] left Blaire covered in alcohol with a torn nail, as well as an “unknown substance” thrown into her eyes.

But is Blaire conservative? I’m not sure. She’s made videos about supporting Trump over Hillary in the past, but is more accurately pro-free speech than anything else.

Now, just an ending note on why I’m personally choosing to call Blaire White she.

First, Blaire’s a friend of mine. Second, Blaire doesn’t use pronouns as a weapon. In a recent debate on the Rubin Report, she accurately predicted that her opponent Candace Owens would deliberately call Blaire a male in order to rattle her, but it didn’t work. Some right-wing publications are calling Blaire a man, but on social media all of the backlash about male or female pronouns is coming from Blaire’s followers, not from Blaire herself.