Liberals have been insisting that the Russian government interfered with the presidential election last year, while they continue to deny it. Some evidence has been found to back up the allegations of Russian interference, but nothing has connected the Russian government to the Trump campaign team yet. Now, Vladimir Putin himself is speaking up[1] on the issue. 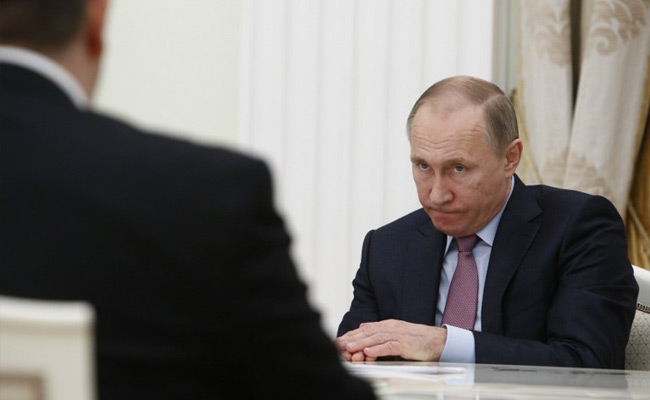 Putin was asked about Russian interference in the election during the International Arctic Forum press conference, held in the Russian city of Arkhangelsk. “As Ronald Reagan once said,” Putin began in Russian, “Watch my lips: no.”

The quote actually is from George H.W. Bush, who famously told Americans during his campaign, “Read my lips: no new taxes.”

He continued to deny any involvement in the election. “All those things are fictional, illusory and provocations, lies. All these are used for domestic American political agendas. The anti-Russian card is played by different political forces inside the United States to trade on that and consolidate their positions inside,” he said. “We said on numerous occasions and I reiterate that we are confident… and know for sure that opinion polls in the United States show that very many people are… friendly towards the Russian Federation.”

“I’d like to tell these people that we perceive and regard the United States as a great power with which we want to establish good partnership relations,” he continued. He also added that he was open to meeting with Donald Trump in Finland.

Accusations against Russia began in January, when the Office of the Director of National Intelligence released a report detailing their alleged interference. “We assess Russian President Vladimir Putin ordered an influence campaign in 2016 aimed at the US presidential election. Russia’s goals were to undermine public faith in the U.S. democratic process, denigrate Secretary (Hillary) Clinton, and harm her electability and potential presidency,” the report read.

Former Vice President Dick Cheney also accused Putin, saying he sought to “to interfere in major ways with our basic fundamental democratic process”, saying that in some countries, his actions “would be considered an act of war.”

Do you think Putin tried to interfere with the election?