Hundreds of NY voters to file lawsuit for this mysterious crime

New York values baby![1] I love how this liberal rag skews their article. Evidently hundreds of voters in New York are magically having their party affiliation switched to “not affiliated” or “Independent.” They are claiming it is both Democrats and Republicans this is being done to, but if you read further into the article, you will see where it is mostly Democrats this is happening to. They find out too late to fix it and are barred from the primary in New York. This is leading to people in the state calling for an open primary. The closed primary system is intended to prevent “party raiding,” when voters switch parties en masse to influence their rival party’s primary. But the extra restrictions and early deadlines can leave some people out, even the children of GOP front-runner Donald Trump, who won’t be voting in the Republican primary because of what they called an “onerous” process. 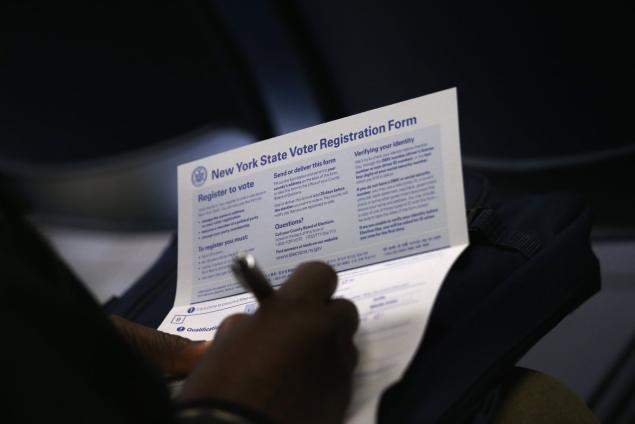 From the New York Daily News:

More than 200 outraged New York voters have joined a lawsuit claiming the party affiliation on their voter registration changed without their consent. The voters say they are unfairly being shut out of Tuesday’s primary.

The suit, to be filed Monday in Brooklyn, calls for New York to be an open primary state, allowing anyone to vote in primaries regardless of party affiliation.

“For many of our complainants, to have the electoral process deprived of them, it’s devastating,” Shyla Nelson, an activist and spokeswoman for Election Justice U.S.A., told the Daily News.

New York is one of 11 states that has a closed primary system and, due to an obscure election law, voters must have been registered by November of the previous year for the party whose primary they plan to vote in — this is the earliest change-of-party deadline in the country.

“If the primary were open, this would be a non-issue for thousands of registered voters that have had this happen to them,” Nelson said. “By making the primary open, it eliminates one of the most vexing problems New Yorkers have dealt with in this primary season.

“It’s a threat to the democratic process,” he added

I would say part of this is Trumpsters calling foul. But I would also say there is an excellent chance of voter fraud here. Things are all electronic now, so it would not surprise me if Bernie Sanders supporters, or those who are likely to be his supporters, suddenly found themselves unable to vote. That’s the Clinton way. Progressives on both sides want open primaries so Marxists can take over the voting. In the Empire State, the Bernie Sanders campaign has publicly slammed the closed primary policy saying it shuts out independent voters and young voters, two groups that would tend to vote for the socialist-leaning candidate. The New York State Board of Elections has no comment over all this. Marxists are whipping the masses into collective outrage over a voting system that has worked forever this way. Either way, the voter gets screwed.