I really admire and adore Gary Sinise…[1] he’s principled and has a spine of steel. We all said Bergdahl was a stone cold traitor, but that didn’t stop Obama from trading five of the very worst from Gitmo for the deserter. And we paid money as well. Six soldiers died trying to rescue his treasonous arse. Obama preened and pranced in the Rose Garden with Bergdalh’s converted parents – getting especially handsy and familiar with the mother. It was sickening and disgusting. It was vintage Barack Obama. 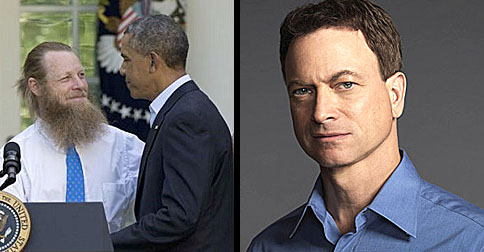 On Wednesday, Bergdahl was finally charged[2] with desertion and misbehavior before the enemy — after Obama outrageously forced the Pentagon[3] to delay those charges for months.

Sinise took to Twitter to say the Obama administration owes an explanation not just to the nation, but especially to the families of the 6 soldiers who died[4] looking for Bergdahl.

Sinise is beloved by millions of Americans, both for his Emmy Award-winning acting, but more so for his tireless advocacy for veterans. He issued his demand to his more than a half million followers on Twitter, and their response ran the gamut, nearly all supportive, but not confident that this “lawless” president would ever explain a word of his disgraceful actions:

And Obama is still not sorry – in fact, his sycophants are not apologizing at all. They are also going to stonewall releasing documentation on the whole sordid affair. Bergdahl should get a firing squad for what he did. He consorted with the enemy and actively aided and abetted them in the murder of American soldiers. Sinise stood up and demanded justice for those who died because of this traitor. His half a million followers want answers as do the rest of America. Few hold out hope of justice though. Sad days in America.