Breaking: Al Qaeda Acknowledges That Osama Is Having Fun With 72 Male Virgins

Just coming across the wires now, Al Qaeda is proclaiming on their terrorist websites that, in fact, Osama Bin Laden took a bullet to his head, blowing his murderous brains out.

In the statement, the terror group warned their leader’s “blood will not be wasted” and attacks on American and its allies will continue.

Now, will this stop the stupid “Deather” meme?

The confirmation followed claims by US officials that it had been planning an attack on the U.S. rail network to mark the 10th anniversary of 9/11.

The plot was apparently uncovered as US agencies went through information seized from bin Laden’s compound after he was killed in a raid by Navy Seals.

So much for the Liberal meme that Al Qaeda was no longer a threat (but, we apparently still needed to kill Osama because he was a threat…..Liberal logic at it’s most insane).

Meanwhile, while we are waiting, apparently NY Muslims are outraged[2] over Bin Laden being turned in lamprey food. This is what’s happening[3] to Osama right about now. 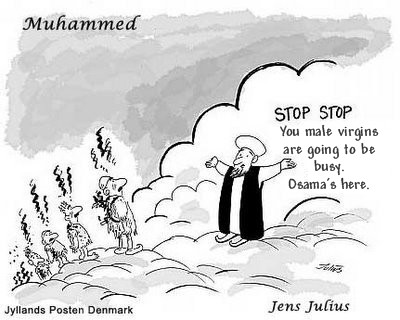