Want to see a real man…[1] a real Christian… a real warrior? Jordan Matson is fighting alongside the Kurds. He’s a veteran and a Christian and he’s taking the fight to the barbaric hordes of ISIS – because Obama won’t. The Kurds who have stood by America forever, are being refused all intel, ammo, arms and support by the US. Jordan and Egypt have been rebuffed as well. As Matson states, our troops have their hands tied on the battlefield. That’s intended to keep them from defeating the enemy. Obama is actively supporting our enemies and setting up our allies for defeat and death. That my friends, in my book, is treason. 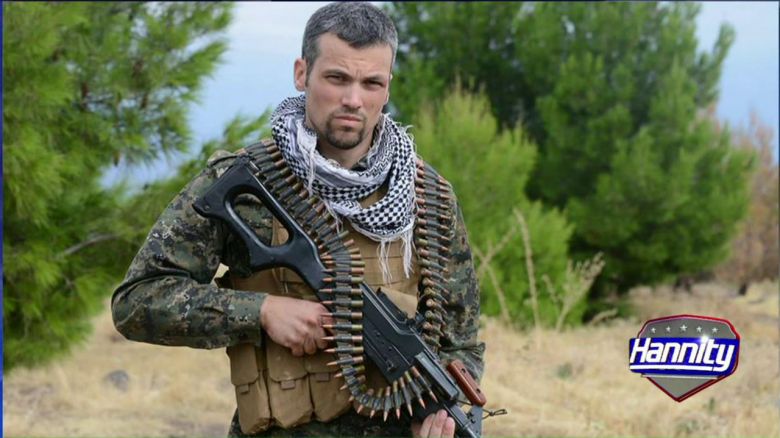 Meet Jordan Matson, an American veteran and Christian who is fighting with the Kurds to defeat ISIS.

Matson has been fighting ISIS since September. His vest is inscribed with the words, “Christ is Lord.”

Matson spoke to Sean Hannity today from an undisclosed location in Syria. He explained that the tipping point for him was when Mosul fell to ISIS, and Christians were forced to flee or be killed.

“I decided if our government wasn’t going to do anything, I would,” he said of his decision to fight ISIS overseas.

Matson alleged that people are dying because of politics. He said that the Kurdish people stood by the U.S. for 10 years, and that people in the region just want to live in peace.

The U.S. veteran added that pro-America Syrian Kurds are getting absolutely no financial or military support.

As hundreds of Yezidis were beheaded and their wives and children were sold as slaves and worse, Obama pretended to send support. As ISIS rages across the Middle East and is at the gates of Europe, Obama pretends to bomb real targets. As a Jordanian pilot was burned to death in living and dying color, Obama would not blame radical Islam. As 21 Egyptian Coptic Christians met their fates on the sands of Tripoli and were beheaded in front of the world, Obama golfed and would not even call them Christians. America, our president is fighting for the enemy. He is the ultimate enemy from within. Bless Jordan Matson for fighting the fight for Christians and for standing besides the Kurds who just want to live in peace. Matson knows that the odds are against him and he could die horribly. He does it anyway. At least Matson has a spine – we just have a radical Muslim in the White House[2].