Homeland Security Secretary: There are Terrorist ISIS Sleeper Cells in the U.S. RIGHT NOW Getting Ready to Attack

I absolutely believe there are ISIS sleeper cells in the US. But the FBI and DHS coming out on this and ratcheting up the “We’re all gonna die!” rhetoric over this has nothing to do with an imminent attack in the US. It is extortion to get the conservatives to fund Obama’s illegal and unconstitutional Executive Orders dealing with Amnesty and illegal immigration. Suddenly, the FBI opens cases in 49 states[1] claiming that ISIS has agents in all of them getting ready to attack. The timing couldn’t be more suspect. Obama acts bored when a Jordanian pilot is burned alive by ISIS… he could care less when French cartoonists are slaughtered by Islamic radicals… what’s a few Jews who get killed in a market in Paris? But when funding for DHS is at stake, suddenly we have to quick… fund everything including Amnesty and DHS or we are doomed! It would be laughable if it weren’t so deadly serious. 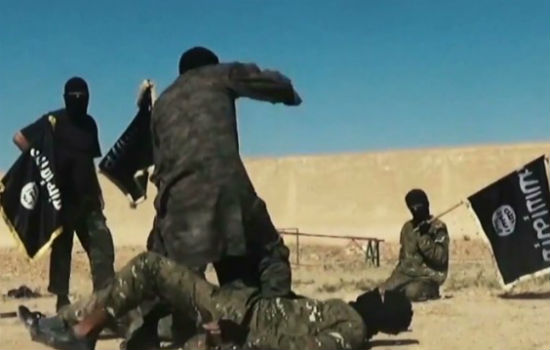 On Sunday, Department of Homeland Security Secretary Jeh Johnson claimed that there were terrorist sleeper cells operating within the U.S. right now.

The announcement comes in the aftermath of heightened terrorist presence on the world stage; last month, Paris saw several attacks carried out by French jihadists. Last week, the Islamic State (ISIS) released a video where the terrorist organization brutally murdered a captured prisoner by lighting the Jordanian pilot on fire.

On Sunday’s “State of the Union” on CNN, Johnson claimed that there are sleeper cells in the U.S. who have communicated with ISIS and other assorted terrorist groups who have “a desire to conduct an attack” on the U.S.

Johnson did not reveal how many were in the U.S.

Johnson claimed that social media has aided the communication capabilities of terrorist groups. “The FBI and the Department of Homeland Security do a pretty good job of tracking the travel of individuals of suspicion, of investigating potential acts of terror or material support for terrorism,” Johnson stated. “Just this past Friday there were arrests of five individuals who were providing material support, allegedly, to ISIL.”

The Homeland Security official also plugged Democrat efforts to fight Republicans in Congress who have withheld funding from programs that would enable Obama’s unilateral amnesty to take effect.

While the threat of terrorism remains very real, the “fund us or terrorists will attack” talking point is precisely the kind of tactic for which the Obama Administration has, shamefully, become known.

As Obama enacts legislation unilaterally to grant amnesty to those who came here illegally, he has worked to place the burden of facilitating his edict on the GOP-controlled House and Senate who are under no obligation to rubberstamp his radical agenda.

If Johnson or Obama wish for the Department of Homeland Security to enjoy full funding, the president must be willing to abide by the Constitution and accept that he cannot grant amnesty to millions of illegals.

Obama’s not the only one making political hay on this either. Lindsey (Dancing Queen) Graham is trying to go Alpha (lol) and is screaming how we are going to be attacked and it is all Obama’s fault. True, but Graham is taking advantage of what he sees as a political weak spot and is moronically and inadvertently (maybe) helping the Democrat Marxists pursue their Amnesty dreams using national security as a weapon in itself. The note reads: Fund Amnesty, or your country gets it… said in true Chicago mafia style. So, before we ‘Quick, do something!,’ perhaps we should look to the true reason behind the posturing and not be Charlie Brown to Obama’s Lucy and the football again, shall we?