ISIS has now killed an American citizen. They need to die by the thousands.

We need to ramp up the bombing campaign and start putting these animals in the ground by the thousands[2]. 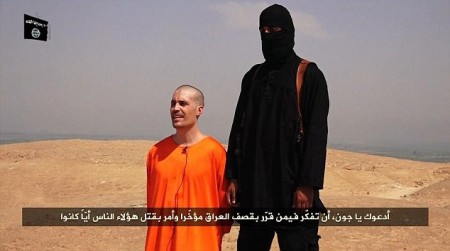 A shocking video has emerged showing an ISIS militant who speaks with a British accent brutally executing an American photojournalist who was kidnapped in Syria two years ago.

Graphic footage of the execution appeared in an video titled: ‘A Message to the U.S.’, in which an apparently coerced James Wright Foley, 40, describes America as his true killers for using airstrikes to assist Kurdish forces in recapturing the Mosul Dam from ISIS militants.

Foley – who went missing in 2012 while working for the Global Post news agency in Syria – is then beheaded with a small knife over a period of seven minutes by a masked man dressed all in black.

The executioner, who speaks directly to the camera in what appears to be a London accent, then warns that a second captured American journalist will be killed if the U.S. doesn’t halt the airstrikes.

That was their message to America. Our message should be attached to Hellfire missiles. We should work with the Iraqi government and Kurdish government. They supply the manpower, we supply the bombers and drones, and ISIS does the dying.