Good for the Kurds[1]. More Sharia Law promotion in Britain. Britain, we knew you when. Of course, you’d find the radical Islamist, Anjem Choudary, in the middle of this. In a scene more reminiscent of fighting in the streets of Iraq, Kurds and radical Islamists rioted in London this weekend. Punches and bricks were thrown. Bats were swung at heads. Police tried to break it up, but no one is afraid of the police there anymore and the cops got pummeled. This is what Britain has become… they have fallen to radical Islam. My husband lived in Britain for years and loved it so. He’d no sooner set foot there now, than in Hades. Same diff. 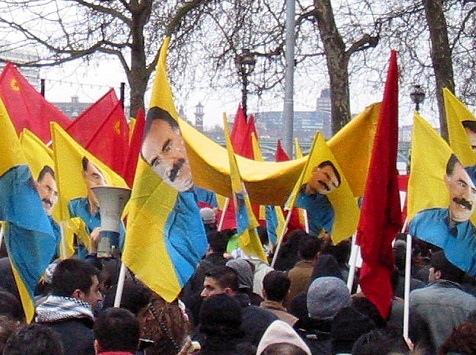 In scenes reminiscent of the battle for Kobani, Kurds clashed with Islamists, including well known preacher Anjem Choudary, on the streets of Wood Green, London yesterday at about 5pm.

According to the Haringey Independent[2], the clashes occurred as a group of Kurds walked through Wood Green on their way to the Kurdish Community Centre where they were planning to celebrate Newroz, the traditional Iranian new year celebrations.

Also present on the High Street was an Islamic Roadshow Stall, part hosted by Anjem Choudary, where Islamists were promoting Sharia Law and urging Muslims not to vote.

Video footage[3] shot by a group of young boys who appear to be on top of The Mall shopping centre at the time the riots broke out shows dozens of men swinging bats and throwing bricks at each other while police in high vis. jackets try to separate them.

Women are also present in the rioting crowds, at least one of whom was waving one of a number of purple flags, thought to belong to the Kurdish group. Most of the crowd can be heard chanting, although it is unclear what they are saying. Shoppers, including one young mum pushing a buggy, quickly disperse as shop windows are smashed.

Eventually a number of police back up vehicles arrive on the scene to drive the clashing hordes apart. But one of the young lads filming observes “No-one’s scared of the police”. Another notes “At least no Muslims died.”

Another video posted to YouTube[4] shows the Islamic Roadshow before the rioting broke out. Muslim women in full veil hand out A4 sheets of paper with the answers to questions such as “What is Islam?” and “Who is Mohammed?” The stall was demolished by the fighting.

It will only get worse and more violent on the streets of London and throughout Europe. Jews and Christians are fleeing en masse and with very good reason. They are being hunted and a new holocaust is beginning. Meanwhile, the media ignores what is happening and actively covers it up. If people can get out of these countries they are doing so now… those that can’t are preparing to fight, or are already fighting, for their lives and their families. As ISIS and the Caliphate spread, more and more fighting in the streets will be seen by those who stand against the Religion of Peace.