While Michael Moore was blasting our troops, check out what Bradley Cooper was doing for them. (VIDEO)

Loved the book[1] and I’ve got the movie on my Amazon Wish List. As soon as it is available, my family and I will sit down and everyone will watch it. It will be hard to watch, knowing that Chris is gone, but I understand that it is one of the best movies ever and I know we will all enjoy it. The movie not only depicts what a great man Chris Kyle was, but brings home his service and sacrifice to all Americans. Bradley Cooper did a fantastic job, as did Clint Eastwood. Michael Moore’s sour grapes shows what a coward he is – Cooper’s performance and caring for our warriors shows that he is not only a great actor, but a great man as well. Chris Kyle would have been proud of the movie and he would have been equally proud of Cooper’s interface with our military men and women. 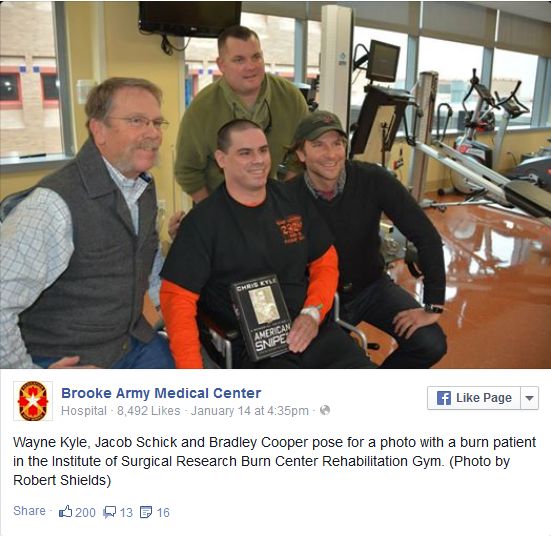 Troops at the Brooke Army Medical Center in San Antonio, Texas got a special surprise after a screening of “American Sniper” on Jan. 14: a visit from Bradley Cooper.

As nearly 260 service members watched Cooper play Navy SEAL Chris Kyle — the most lethal sniper in U.S. military history — the actor secretly made rounds through the hospital visiting patients and wounded soldiers. The crowd erupted in applause when Cooper suddenly entered the auditorium at the film’s end, according to the BAMC press release[2].

And Cooper didn’t come alone. Special guests like Kyle’s father Wayne and two veterans who appeared in the movie, Bryan Anderson and Jacob Schick, joined him for a question-and-answer session.

“I know when Bradley walked in you were all cheering wildly for him, but it’s us who needs to be cheering for you all,” Wayne Kyle said. His son Chris, whose story served as the basis for the film and book of the same name, was tragically shot and killed in February 2013 at a shooting range after serving four tours in Iraq and receiving several commendations for acts of heroism.

In answer to how he prepared for the role, Cooper said he studied the intricacies of military weapons and added bulk to his frame.

“Making this movie was a life-changing experience,” he said, according to BAMC[3]. “I was terrified when I started. I didn’t know if I could actually get to a place where I would believe that I was Chris.”

For at least one Marine in the audience, Cooper did the part justice. “I feel like you are one of my brothers,” he said in a tearful response. “I think you did really well and I just want to say thank you.”

Cooper delivered an additional message to all service members in a video interview with All Hands magazine[4] on Jan 15.

Think of what this means to the men and women who fight, bleed and die for us. This is their voice you are hearing through this movie. I was touched to see the two vets with Cooper who were in the movie as well. Bryan Anderson and Jacob Schick are still giving back to America. Both are heroes and very brave men. They all took the time to go visit injured vets who cheered wildly for them and the movie. Kyle’s father, Wayne Kyle, has been a giant of a leader through all of this in what has to be the darkest period of his life. The movie will become one of the greatest films of all time and the Leftists hate it with a passion. Which in my book, makes it just that much better. Can’t wait to see it – here’s to you Chris. 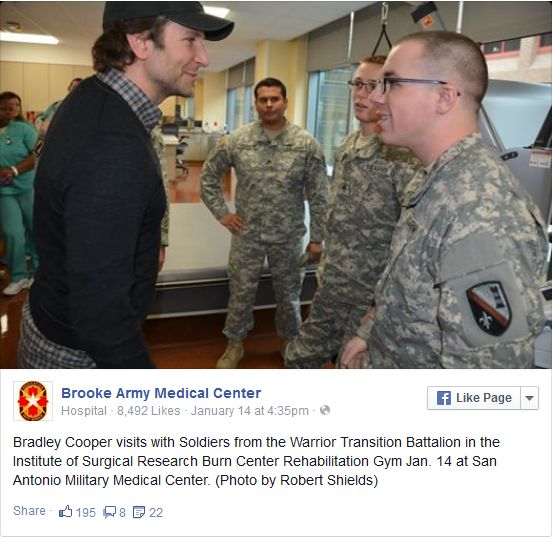 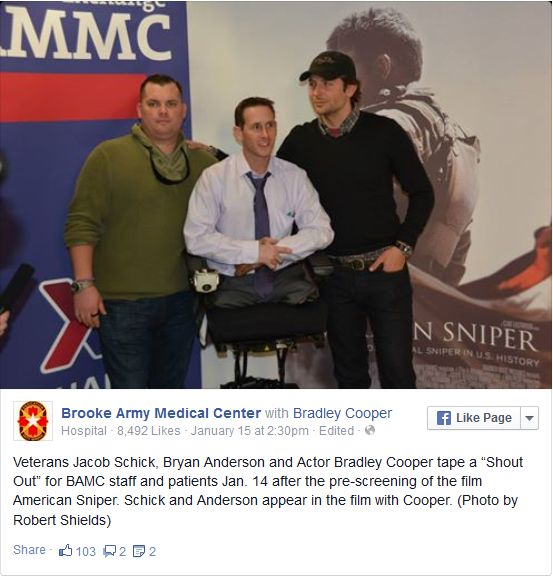