Drones are a perfect form of reconnaissance[1]. The authorities in France are playing this down as not a probable threat, but what are the odds of at least five drones in one night buzzing the most popular and politically important spots in France? Nada. Someone is surveilling targets for very bad things, I would wager. Whatever it is, it seems to be in the fact-gathering stage. The French have no clue who is behind this, much less capturing them. That is not good. But when in doubt, they do what politicians do best – deflect and downplay. 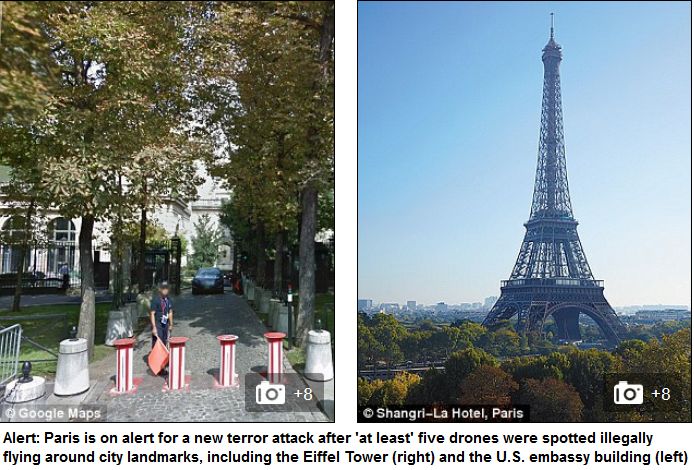 Paris is on alert for a new terror attack after ‘at least’ five drones were spotted illegally flying around city landmarks, including the Eiffel Tower, Bastille Square and the U.S. embassy building.

French security sources where unable to catch the operators of the drones, which are typically fitted with video recording equipment and can be used for surveillance of a terror target to assess security levels and any spikes in pedestrian football ahead of a planned attack.

The first drone sighting was near the US embassy in the French capital at around midnight.

Between then and 6am the Eiffel Tower, Bastille Square, the Place de la Concorde and the Invalides military museum ‘were also flown over’, a security source said.

‘It could be a coordinated action but we don’t know for now,’ the source, who asked not to be identified, added.

‘We did everything to try and catch the operators but they were not found,’ another source close to the investigation said.

France has experienced a series of mysterious drone appearances in the last few months. On January 20, a pilotless aircraft briefly went over the presidential palace in Paris, while around 20 drones were earlier seen flying above nuclear power plants.

However until Tuesday ‘there have never been so many drones appearing in one night,’ the security source said.

The emergence of drones comes amid warnings by terrorist groups that they will attack the city, following January shootings which left a total of 20 dead, including three terrorists.

‘They could be seen throughout the night, but nobody knows who were operating them,’ said a police source in the capital.

A specialist police aviation unit tried to establish who was at the controls, but there have been no arrests.

There have been other mysterious drone flights across Paris, but this is the first time that such a concentrated number have been seen above so many potentially vulnerable targets.

The US embassy has been threatened by numerous groups in the past, from Al-Qaeda to Algeria’s Armed Islamic Group.

French law bans small, civilian drones from areas such as nuclear facilities, which are protected by a no-fly zone that spans a 1.6-mile radius and a height of 1,000 metres.

Despite a heightened security alert over the risk of Islamist attacks in France, police so far have been unable to identify who is behind the drone activity. Experts say that the small unmanned craft would not pose a threat if crashed into a hardened nuclear facility.

Earlier this month France unveiled its latest weapon against the growing menace of rogue drones buzzing through their nation’s skies: another drone, with a net.

In a demonstration flight in La Queue-en-Brie, east of Paris, the mesh-wielding flying machine was shown snaring a DJI Phantom 2 drone – the same brand as one which crashed onto the White House lawn last month.

The U.S. Secret Service was sent scrambling by the unexpected intrusion, but France has already faced dozens of drone overflights over sensitive sites.

Mystery drones have buzzed nuclear plants, military installations and even the presidential palace in recent months, as fears run high of terror attacks linked to the Islamic State terror group.

Regardless of what they say to the public, you can bet they are spooked. Especially after last month’s attacks. The video below shows a drone net flown by a drone. This looks like a really dumb idea to me. Whatever happened to shooting down those drones? Or are the French so allergic to guns that they only carry broomsticks now? NATO just held exercises[2] with broomsticks instead of guns. The world has gone moonbat nuts. Boys, you had better deploy troops with orders to use weapons and kill if need be. Unless of course you want a nuke landing on your head or your most popular tourist spots blown to smithereens. Drones are a threat, treat them as such. 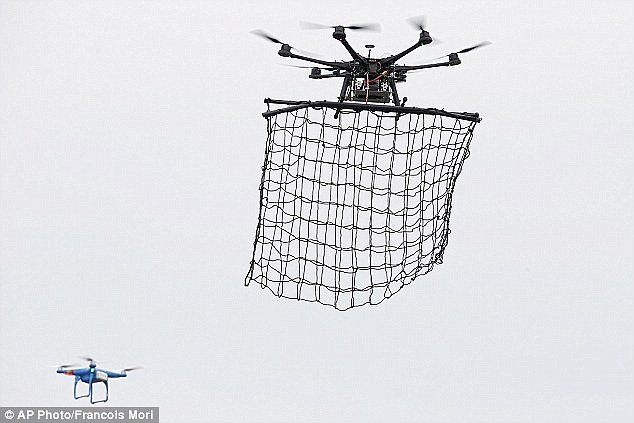