Absolutely and utterly predictable[1] – Obama knew this would happen. There’s no way he could not have known and he is not stupid. He is aggressively and actively releasing prisoners from Gitmo for a couple of reasons. The first is he wants to not only shut Gitmo down, he wants that whole military complex gone. Second, they are Muslims and he feels they are being wrongly persecuted and should go back to their countries and their holy wars. He feels a colonialist America wronged them in the first place, so scores were settled. Obama is also pandering to his Progressive Liberal base – this is a promise he made long ago. It doesn’t matter that what he is doing is blatantly unconstitutional – his people demand it. 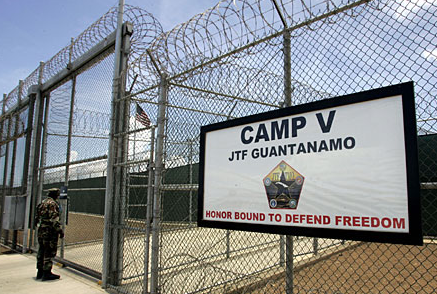 As President Obama frees droves of terrorists—including five Yemenis this week—from the U.S. military prison in Guantanamo news reports confirm that a Gitmo alum who once led a Taliban unit has established the first Islamic State of Iraq and Syria (ISIS) base in Afghanistan.

His name is Mullah Abdul Rauf and international and domestic media reports say he’s operating in Helmand province, actively recruiting fighters for ISIS. Citing local sources, a British newspaper writes that Rauf set up a base[2] and is offering good wages to anyone willing to fight for the Islamic State. Rauf was a corps commander during the Taliban’s 1996-2001 rule of Afghanistan, according to intelligence reports. After getting captured by U.S. forces, he was sent to Gitmo in southeast Cuba but was released in 2007.

Rauf’s Department of Defense Joint Task Force Guantanamo file[3] describes him as being closely associated with several senior level Taliban commanders and leaders. It also says that Rauf admitted involvement in the production and sales of opium as well as associations with criminal elements within the Taliban and the Northern Alliance. From the file: “Due to recent findings that detainee may have had a more important role within the Taliban than previously thought detainee’s intelligence value has been updated from low to medium due to his possible knowledge of: (1) Taliban leadership, (2) Taliban command and control.”

Rauf is one of a number of Gitmo terrorists who have returned to the fight after getting released, yet Obama continues freeing captives to keep his campaign promise of closing the prison. Just this week he let four Yemenis go, despite the risk that they will likely join Al Qaeda in the Arabian Peninsula, the Yemen-based terror group that claimed responsibility for last week’s attack in France. In fact, dozens of freed Gitmo detainees have rejoined Al Qaeda in Yemen, the country where the 2009 Christmas Day airline bomber proudly trained. In 2010 Judicial Watch reported[4] that a number of high-ranking Al Qaeda militants in Yemen—once held at Gitmo—may have been involved in a sophisticated scheme to send bombs on a U.S.-bound cargo plane.

Just a few weeks ago JW uncovered an embarrassing gaffe involving an Al Qaeda operative liberated from Gitmo years ago. Turns out the U.S. government has now put him on a global terrorist list and offered $5 million[5] for information on his whereabouts! That disturbing news came during a week when Obama freed four more longtime Gitmo captives to Afghanistan. Shutting the compound down will be tough because it still houses about 120 of the world’s most dangerous jihadists, including 9/11 masterminds Khalid Sheikh Mohammed (KSM), Ramzi Binalshibh, Ali Abdul Aziz Ali, and Mustafa Ahmed Adam al Hawsawi as well as USS Cole bomber Abd al-Rahim al-Nashiri.

Now these former Gitmo residents are free to carry out Jihad for ISIS and one is opening a base in Afghanistan. As I have said before, ISIS, al Qaeda, Boko Haram, the Taliban – they are all different faces of the same Islamic monster. They are one and the same and they work towards furthering a worldwide Caliphate and the implementation of Shariah law. It matters not to Obama that these are stone-cold killers who had their bloody hands in 9/11 victims’ blood… what matters is the Ummah and the holy word of the Prophet. Freeing the Gitmo detainees is lighting the fuse on a massive terror bomb that is sure to target the US and Israel. And the blood of innocent Americans and Jews will cover our President from head to toe when it goes off.