The Greatest Threat To Peace

It’s nice to know that the Obama Administration is doing absolutely nothing that might upset the Islamic radicals running the Islamofascist Republic of Iran.

Iranian president Mahmoud Ahmadinejad announced the other day that it’s time for the world to get used to dealing with a nuclear Iran.:  And of course, he added, they were not planning on using nuclear weapons against Israel.

If you remember, back during the presidential election, Vice President Biden assured us that we have nothing to worry about from Iran.:  So what if they’re pursuing nuclear weapons?:  According to Biden, they can pursue nukes all they want; it doesn’t matter to the US because they don’t have a delivery system giving them the capability of threatening the world with their weapons.

But look at what Iran did just the other day: they basically strapped a monkey onto a rocket and launched him into space…and for some reason this didn’t look suspicious to anyone.:  The monkey in space thing was done to death back in the 1950s, and anyone who truly believes that Iran is suddenly interested in developing a manned space program should be smacked upside the head.

But a manned space program is great cover for developing a delivery system for the nuclear weapons they’re working on so diligently.

And now Iran says that they are able to use the stealth drone that they were able to capture last year, and have released a video that supposedly shows the drone flying over a US base in Afghanistan, as well as the city of Kandahar. 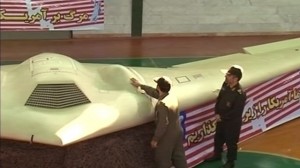 The main thing about Iran is that on the home front, we have the blind following the blind, allowing evil men to get away with whatever they want.:  It seems that the Obama administration is so fearful of offending groups like CAIR that they refuse to engage legitimate threats to America’s security and the security of US allies like Israel.

It does not help matters at all that the Obama administration has gone through a systematic campaign that has emboldened our enemies in the Middle East region.: :  They encouraged the Arab Spring movement that allowed Muslim radicals to take power in several Middle Eastern nations.:  Not only that, but the Administration has given both monetary aid and material military aid to the Muslim Brotherhood regime in Egypt.:  Egypt under Hosni Mubarak was always a tenuous ally of Israel, but attacks on Israel from Egypt have happened before; the difference now is that future attacks could take place using American military hardware.

The Obama administration seems committed to doing everything wrong in the Middle East, and their choices of John Kerry for Secretary of State and Chuck Hagel for Secretary of Defense will not help that at all.:  It seems that we are approaching a point where the President himself and his administration will constitute a clear and present danger to the security of our nation.