There are certain people it’s particularly wise to avoid conflict with — at least until you don’t need them anymore. For example, you never want to mouth off to your barber before he cuts your hair. It’s also wise to be extremely polite to your waitress before she brings you your food. The last thing you want is an angry waitress trying to figure out what sort of special sauce she can have slipped onto your burger to get back at you for complaining about the slow service. There’s now another profession you want to be VERY, VERY CAREFUL about insulting: tattoo artists[1].

A 21-YEAR-OLD man has been charged by police in Ipswich for allegedly tattooing a penis on a man’s back – instead of the image he had requested.

…He wanted a yin and yang symbol with some dragons, but was instead shocked to discover the 40cm tattoo was of a penis with an obscene slogan.

…Police said the tattooing followed an argument between the men, during which the professional tattooist allegedly took offence at something the other man said.

The victim has also alleged he was punched and thrown out of the house following the tattooing.

First off, I’m not sure that something as trite as a “yin and yang symbol with some dragons” would be much of an improvement over a penis….okay, maybe that’s a wee bit of an exaggeration. Yet and still, why do people get lame tats like that? If you’re going to get a tattoo to show everyone how unique you are, why not go all out? What’s the worst that can happen…well, besides having a penis tattooed on your back?

Wow. There is the arm of a human being who could explain in great detail what the word “regret” means. Well, at least there’s nowhere to go but up from there, right? Wrong…. 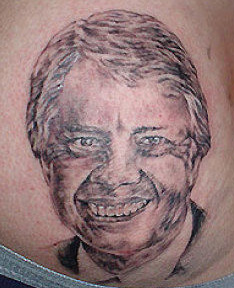 Anyway, none of this probably makes the guy with the penis tattoo on his back feel any better, but unlike the two owners of these tats, at least he can comfort himself with the fact that he didn’t voluntarily have a **** inked on his body.