Horrified Doctors Find THIS Inside Lump On Man’s Neck

This is what nightmares[1] are made of. If you ever have a cyst on any part of your body, get it drained or removed immediately. 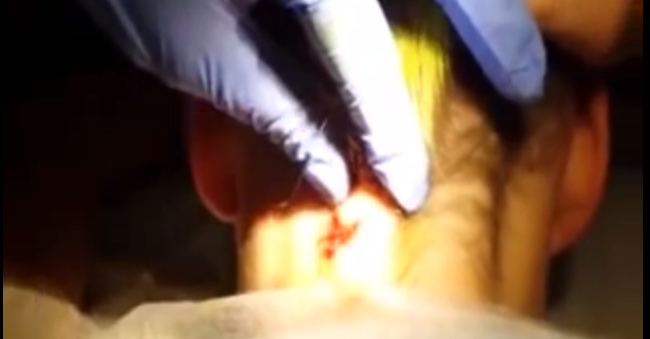 If you’re a bit squeamish now is probably a good time to look away.

This video shows the disgusting moment[3] a man had a cyst the size of a golf ball removed from his neck.

The man, named in the video has David, can be seen leaning forward as a doctor[4] wearing blue gloves makes an incision in the lump.

“There’s definitely some puss in there,” the doctor tells him as he prods around with the cyst.

He then tells his patient, who is holding up his dyed yellow hair out of the way, that he’s about to drain the giant spot.

A few squeezes later he realises there’s little in the way of a ‘pop’, so he takes the scalpel and apologies before cutting a little deeper.

Within seconds the cyst pops and gruesome yellow puss comes pouring out.

The woman filming the removal, believed to be his mum, tells him: “You owe me David.”