If dinosaurs had rats in their kitchens, they’d look like this[1]. You could make a coat out of this thing, you know, if you wanted a rat coat for some weird reason. 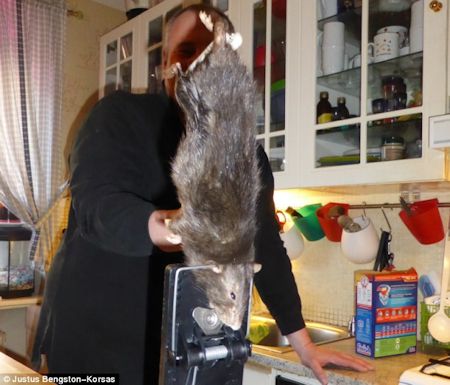 A Swedish family suffered the shock of a lifetime when they discovered that the ‘kitchen mouse’ that had their cat running around in circles was in fact a gigantic monster rat.

The Bengtsson-KorsÃ¥s family first noticed something was wrong when their cat Enok refused to enter the kitchen in their flat in Solna, north-west Stockholm.

The rat measured 15 inches, without its tail, and had made it into the family’s flat by gnawing a tunnel between a wooden panel and concrete.

…The rat had made itself comfortable behind the family’s dishwasher and even caused a leak by chewing its way through the waterpipes.

…Exterminators were called in and placed industry-sized traps to catch the rat, and less than a day later one of them snapped.

However, when the family checked, the trap was gone. The rat was so powerful that it had carried the trap with it, snapped around its neck.

‘It didn’t die when it went into the trap, but scurried away. It went underneath a wooden plant, where it got stuck and choked itself to death,’ Mr Bengtsson-KorsÃ¥s said.

No wonder their cat was afraid of that thing; he probably thought it was a small dog.