Paul Rasolie spent TWO YEARS preparing to be eaten alive by an anaconda. He had a special suit designed. The event was hyped relentlessly and then[1]… 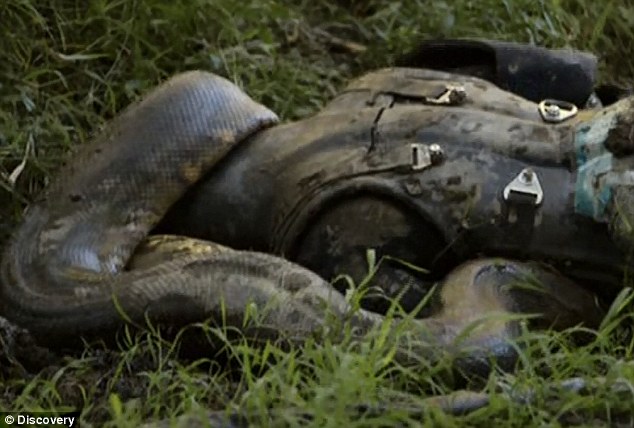 An American naturalist filmed himself being ‘eaten alive’ by a snake for a TV stunt – but is now facing ridicule for getting his safety team to save him after just part of his head was consumed.

In footage aired on the Discovery Channel on Sunday night – it airs on UK TV on Friday – 27-year-old Paul Rosolie and his 10-strong team tracked down the 20ft-long, 18st anaconda to the headwaters of the Amazon river.

Donning a black armored suit, slathered in pig blood, Mr Rosolie then moved tentatively ‘on all fours’ toward the enormous beast as the cameras rolled and his wife, Gowri, watched.

Seconds later, the female anaconda – one of the world’s most fearsome creatures – pounced on its 5ft 9ins victim, latching on to his head, before constricting his arms and body.

…However, as Mr Rosolie felt his arm ‘start to break’ under the snake’s grip, he ordered his team of fellow naturalists, doctors and vets to save him – with just the top of his head in the animal’s jaws.

Within minutes of the show, named ‘Eaten Alive’, being broadcast, people across America were taking to social networking sites to express their disappointment at the highly anticipated footage.

Twitter user Josh Harris, from Boston , wrote: ‘They should rename #EatenAlive alive to look for snakes for 1.5 hours and then Try to be eaten alive but only get a scratch on my arm.’

Meanwhile, Connor McCarthy, from Pennsylvania, tweeted: ‘I hope Paul is happy despite letting an entire nation down. I can’t believe he can show his face on tv right now. What a wuss #EatenAlive.’

And Stacey Taylor, from Ontario, Canada, said: ‘#EatenAlive complete waste of my time you didn’t even get eaten alive you cant call a show eaten alive and not get eaten by your anaconda!’

On the one hand, Paul Rasolie may be the first human being ever to have survived having his head swallowed by an Anaconda — and you can’t blame him for giving up on it if he was going to get hurt. On the other hand, Rasolie was telling people he was going to be completely swallowed by an anaconda; so this stunt was a HUGE flop.

You know, I’ve always wondered how musicians like Vanilla Ice or one hit wonders like Dexy’s Midnight Runners (‘Come On Eileen’) feel about their fame. For one brief shining moment, they were on top of the world and then it all slipped through their fingers, never to return. Of course, they at least accomplished something. Rasolie’s moment in the sun was seen as a failure. That has to grate on him.