Uh, yeah… right[1]. Sorry folks, the only things I hate more than cockroaches are wasps and spiders. Roaches give me the creeps and humanizing them is just gross. I have seen cockroaches who were so bold, they would charge you. Usually they were big enough to harness and ride. Once you see one, you go on a cleaning binge and you start trying every method in the book to eradicate them. Even the most expensive exterminators can’t get rid of all of them. Hey, I shouldn’t complain – on our last move, in an expensive rental, slugs came up through the foundation into the kitchen at night. So, I’ve been grossed out by the best. I still prefer my cockroaches shy – they should never show their insectile faces to me, because I will find a way to eliminate them with prejudice. I’m just speciest like that. 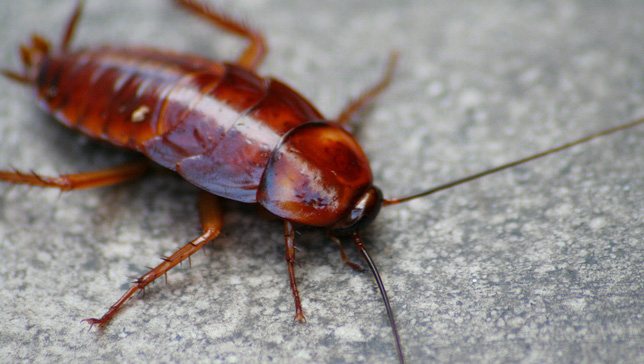 Cockroaches can be bold explorers or cautious wallflowers. (Photo: jo.sau/flickr)

If you were to poll 100 people about their least favorite insect, the top prize for most hated would go to cockroaches. They aren’t poisonous. They run and hide when they see us. It’s just that these little guys gross us out.

But, maybe that’s because we don’t know them well enough. According to researchers at the Université libre de Bruxelles in Belgium, cockroaches aren’t mindless drones on a singular mission to eat our kitchen crumbs. Each insect has a distinct personality, just like you might find in a dog, pig or person.

Researchers placed radio tags on American cockroaches and put the groups in an enclosed dark setting to follow their movements. By observing each individual, they were able to see how quickly each found shelter, and how long they spent exploring their surroundings and searching for food.

When observing these groups for a period of one week, scientists found that some are, as they described them, “bold or explorers” while others are “shy or cautious,” and that those personalities influence the group dynamic.

These personality traits could have something to do with the success of the species. The bolder cockroaches would be more likely to go out in search of food, a tactic that could get them killed by predators. The more cautious cockroaches, if unwilling to go out in search of food when crumbs are scarce, might not flourish either due to a lack of sufficient sustenance. Having two types of personalities helps to ensure that at least part of the population survives. As we all know, cockroaches are definitely survivors.

Sitjà added that his team is now looking into what this new information might teach us about behavior. “We are looking for behavioral syndromes that will help to categorize them and give more information about the existing synergies between personality and social behavior.”

I doubt I will be naming marauding roaches Fred and Mabel any time soon, personalities or not. The only ones finding cockroaches adorable are each other. Nor will I be bonding with them, waxing poetic over their collective intellect and opining how humans would be so much better off living as a colony of roaches do. I actually know whackos who think like that, by the way. It’s disturbing on so many levels. Still reaching for the shoe, guys… The only good roach, is a dead one.