Giving people a hand when they need help is something that most people approve of. But what about those who take advantage of taxpayers, always wanting more and more, demanding a bigger handout? One British family is coming under serious criticism after they refused a five-bedroom home for their 10 children and instead are choosing to live in a taxpayer-funded hotel[1]. 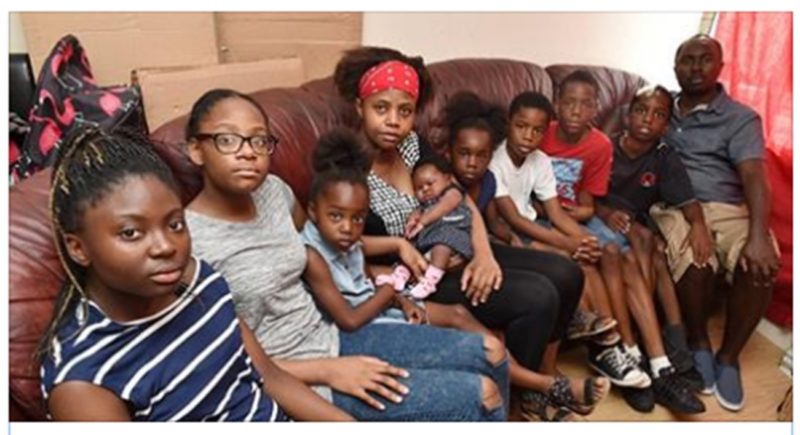 Arnold Malle Sube and his wife Jeanne live in Luton, Bedfordshire with their eight children. Their current home has three bedrooms and is public housing, but they say that it isn’t good enough. They described their current living situation as “terrible,” so a British council offered to put them into a five-bedroom home instead. But they refused that as well, saying that it wasn’t good enough. They need at least six double bedrooms to live comfortably, they said.

But rather than being grateful, the family is angry.

“Me and my family have been neglected,” Arnold said. “It’s so cramped and the conditions are terrible. Everyone is sleeping everywhere and my wife is sleeping with the baby so I am on the sofa. I am homeless in my home now.”

The family relocated from France to the United Kingdom so that Arnold could study mental health nursing at the University of Bedfordshire in 2012. Originally, they were placed in a Hampton by Hilton hotel for four months, which cost taxpayers over $50,000. They also enjoyed $60,000 in housing and child benefits, in addition to child tax credits. The rent for their current home, which they say is too small, is also covered by taxpayers.

But if their current home is too small, then why not take the bigger one when it was offered? “There wasn’t enough space for the things of ten people, it didn’t even have a dining room,” Arnold complained.

A spokesperson for the Luton Borough Council was unapologetic. “Despite difficulties we managed to find Mr. and Mrs. Sube affordable housing in Luton that is large enough to house them and their eight children,” a spokesperson said in a statement. “After a generous offer on our part, we have done our bit and if housing is offered and declined without, what we judge, good reason, then we will offer property to another family.”

Councilor Michael Garrett added that there were “not many five-bedroom council houses in Luton and they were lucky to be offered one.”

Do you think they have the right to complain?