Finally, a step in the right direction regarding the explosively expanding welfare state:

Maine has instituted a new rule that bans those who win more than $5,000 a month by gambling or the lottery from getting food stamps benefits, the state announced Tuesday. …

“In no way, shape or form should taxpayers be asked to foot the bill for someone who is gambling and winning huge amounts of money,” Maine Department of Health and Human Services commissioner Mary Mayhew said in a statement. “Welfare benefits shouldn’t be used for gambling or lottery, and someone who beats the long odds and ‘wins big’ shouldn’t continue receiving assistance while he or she has that money.”

Progressives are no doubt horrified by this display of cold-heartedness.

Maine recently tightened restrictions on using food stamps to buy lottery tickets after the state discovered in 2015 that 3,685 Maine residents on food stamps or other welfare received more than $22 million in lottery prizes since 2010.

Lotteries appeal to people who want to obtain wealth without creating it. So does welfare. At least with lotteries, the payoff isn’t financed on a coercive basis.

Lottery and gambling prizes will be counted as assets, which Maine now measures to determine eligibility for food stamps under rules finalized Sept. 2015. Individuals without children who have more than $5,000 in assets are banned from receiving food stamps under the new restrictions.

“Most Mainers would agree that before someone receives taxpayer-funded welfare benefits, they should sell non-essential assets and use their savings,” [Governor Paul] LePage said when the asset testing rule was approved last fall. “Hardworking Mainers should not come home to see snowmobiles, four-wheelers or Jet Skis in the yards of those who are getting welfare. Welfare is a last resort, not a way of life.”

If only welfare really were a last resort, think how much wealth would be generated. Think how many would no longer be poor. 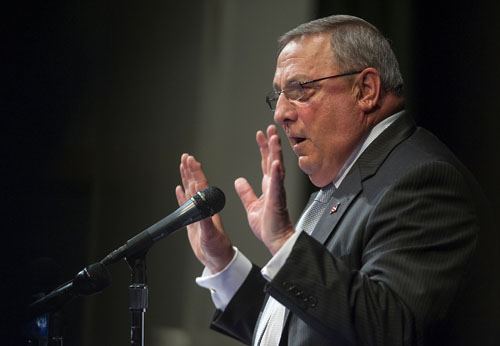 LePage: One of the lonely few pushing back against the welfare state.

On a tip from TCS III. Cross-posted at Moonbattery.