Man Vents On Social Media After Documenting Difference Between His Groceries VS Food Stamp Shopper In Line!

An American Army veteran went food shopping and couldn’t help notice another shopper’s cart. It was loaded with tons of food and that’s when the veteran noticed something strange. The other shopper opened their wallet and people’s jaw dropped. They were paying with food stamps. But that’s not what sparked the controversy on Facebook. The Army veteran noted that the person using food stamps had a wallet full of cash – in fact, more cash than he had himself!

Just one look at this picture and you’ll see why Americans are angry with the way people abuse the welfare system. 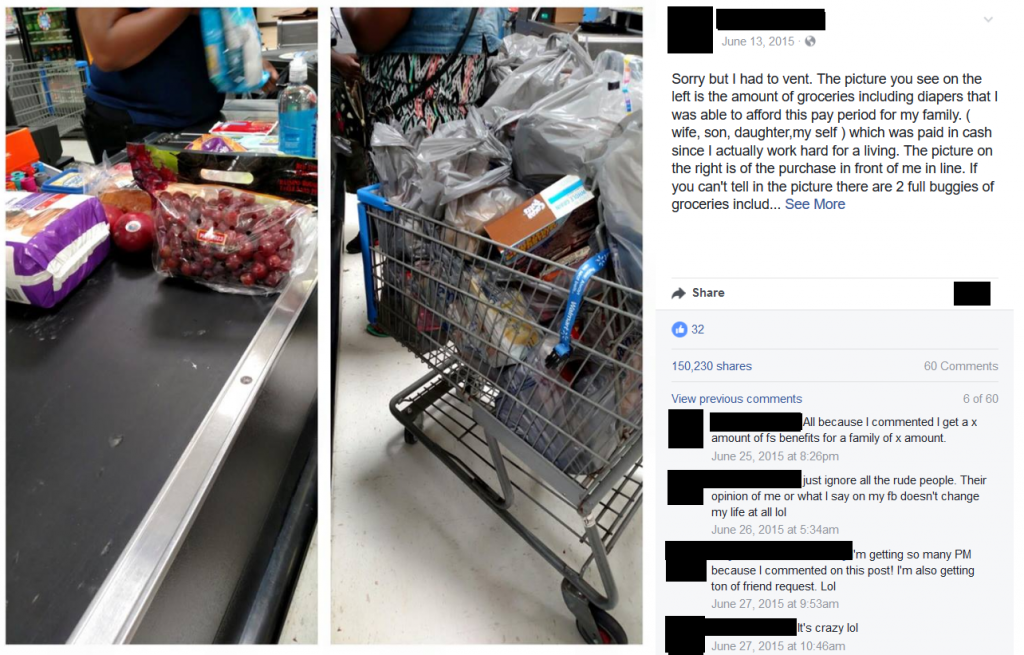 Patrick Gibson’s original post on Facebook[1] compares two shopping carts – his own (as a hardworking America) and the cart of the person abusing the welfare system in America.

Sorry but I had to vent. The picture you see on the left is the amount of groceries including diapers that I was able to afford this pay period for my family. ( wife, son, daughter,my self ) which was paid in cash since I actually work hard for a living. The picture on the right is of the purchase in front of me in line. If you can’t tell in the picture there are 2 full buggies of groceries including such items like steak and some other very nice choices of food. Here’s the kicker. This purchase was made in food stamps. Which I wouldn’t have a problem with if I didn’t see the person move their big fold of cash out of the way to get to the ebt card and then load them into the back of a brand new Hyundai Genesis. That is about 15k-20k more than my car. I just thought I would take the time to tell this person/family that you are very welcome from all of us hard working/ struggling to buy food Americans that have to foot the bill for your fancy steak feast while I skip breakfast and lunch every day that way my wife and children have food to eat everyday, because $50-$75 dollars doesn’t go very far. So you enjoy your $800 free grocery purchase.

A man fights for American freedom and has a shopping car that’s barely filled, an older used car, and an overall lack of being taken care of when he’s the one taking care of all of us.

Then a bum abuses the welfare system, likely has no job, drives an expensive Hyundai Genesis, and has TWO shopping carts filled with food – then has the nerve to move the cash OUT of the way, so they can pay with their free government handouts.

Our military Army veteran with two kids should be the person with the two full shopping carts. The loser paying with welfare food stamps, who clearly has money of their own (probably a drug dealer), should be paying with their own cash and NOT abusing the system.

There’s people who really need the help to get back on their feet, but this welfare leech behavior has got to stop. Not only does it take away from benefits of those who truly need them, but it also costs the American taxpayers.

If someone needs welfare to get by, then that’s OK. But people should not be driving expensive cars and loading up two carts of food when they won’t even get a  job.

Our military soldiers deserve two carts of food for their family. I guess the problem is that hard working Americans are responsible so the leeches of society don’t have to be.

It’s a shame and America desperately need welfare reform. Everyone deserves to eat, but those who work for a living deserve better.

Those who milk the system need to be cut off and forced to get a job. It’s about time they contribute to society instead of leeching from everyone else.

Thank you for your service, Patrick Gibson. We truly appreciate you.