This is outrageous[1], but it really should not surprise anyone. It turns out the number one thing bought by those on welfare is… soda pop. They spend more money on it than real food. What is the number one item purchased by those not on welfare? Milk. I know many will be upset by that and demand that what welfare recipients buy with their EBT cards be strictly limited. I have never been on welfare in my life, but I don’t think telling people what they can and can’t buy with food stamps is the way to go. That’s far too Big Brother for my tastes. If the government will do it to welfare recipients, they’ll do it to all of us before they are done.

There are already restrictions on what you can and can’t buy with an EBT card. Furthermore, SNAP recipients in this study only spent a little less on milk than non-welfare recipients. Don’t you think the FDA should clean up their act before we start dictating to everyone what is and isn’t healthy and what those on welfare can buy? This study is five years old by the way. I sense another health witch hunt.

Data recently published by the U.S. Department of Agriculture shows something that critics of food stamps programs aren’t going to like — in a sample of one particular popular grocery chain in 2011, food stamp recipients spent more money[3] on soda and other sugary drinks than they did on fruits or vegetables — or most food with actual nutritional value.

In fact, sodas and sugary drinks were the #1 item purchased by people in the program.

What was the #1 item for non-food stamp users? Milk.

The USDA culled 2011 sales data from a leading grocery chain[4] and found that households enrolled in the Supplemental Nutritional Assistance Program (SNAP) — better known as food stamps — spent more money on “junk food” than consumers who don’t use food stamps. 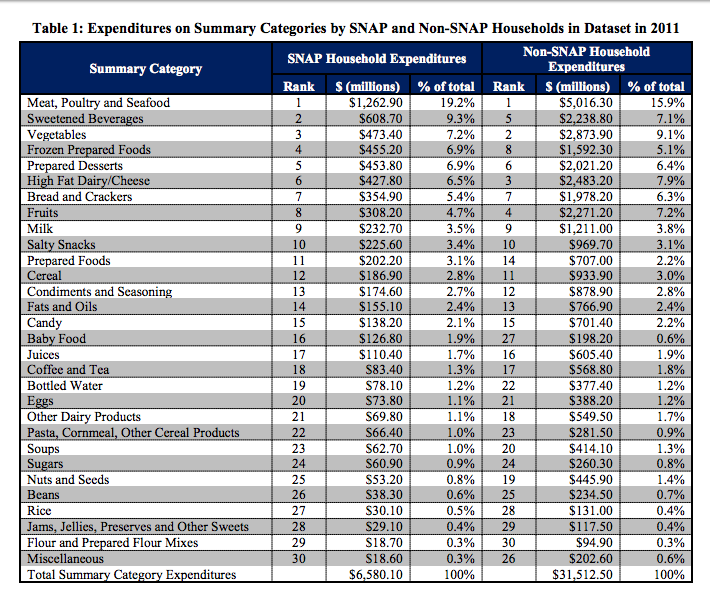 Look, welfare is not a good place to be and we should be forcing people off it as fast as possible. But why make it even worse by Nanny-Stating them on what they eat? It looks like I’m in the minority as many states have introduced bills now that would have very strict guidelines for what those on EBT cards can and can’t buy. In Arkansas, Republican Rep. Mary Bentley is seeking to take items such as chips, soda and candy off of the list.

This all plays into the food deserts nonsense. We want less government intervention, not more. This sounds like a bunch of professional liberal nags that are also control freaks that want to force people to behave like drones and do what they are told. No thanks… just another good reason not to be on welfare I guess.