Angelina Jolie Visits Refugees- Then Gets Mobbed Trying To Do THIS! [WATCH]

Angelina Jolie is a special envoy for the United Nations, and recently visited a refugee camp. Looking slightly out of place, Jolie smiled and worked her way through the crowd that was busy trying to take selfies and generally just be close to her:[1] 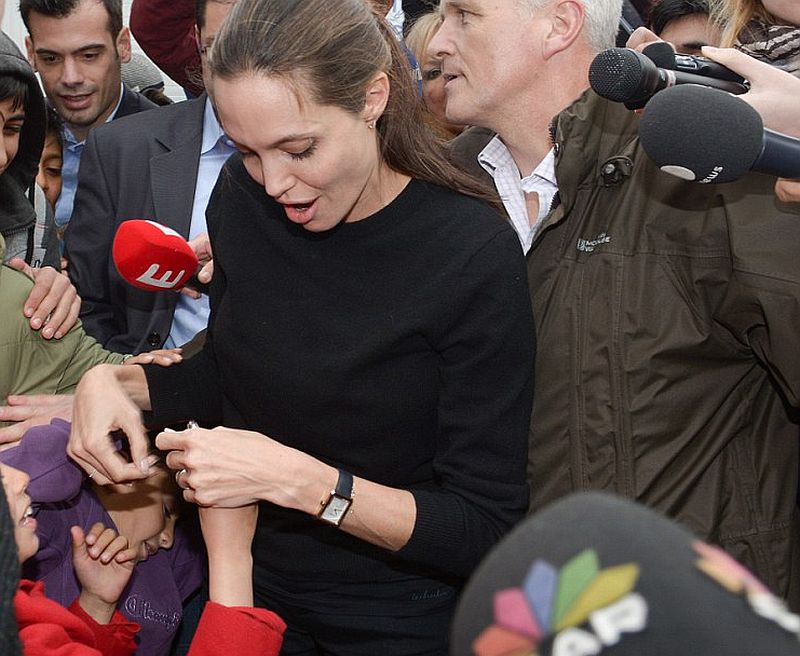 Angelina Jolie was mobbed by hundreds of star-struck migrants today when she visited a Greek port where thousands are stranded.

The actress, a special envoy for the United Nations refugee agency, proved a welcome distraction for the refugees, many of whom have endured torturous journeys into Europe after fleeing war in the Middle East.

At times, she struggled to move through the crowd, with many jostling for the best positions to take pictures and get a glimpse of the Hollywood star.

Jolie greeted children and asked the throng of reporters, cameramen and photographers to be more ‘thoughtful’ as she tried to speak with them.

She told one boy: ‘I’m here to learn and speak with you and the agencies and the government to learn what is happening, OK? Try to stay strong.’

According to the UNHCR, Jolie is visiting Greece ‘to reinforce efforts by UNHCR and the Greek government to step up the emergency response to the deteriorating humanitarian situation’.

About 4,000 people are waiting at the port of Piraeus in Athens either to head north to Greece’s closed border with Macedonia or for a place in rapidly filling official shelters.

Some 44,000 refugees and migrants, the last of the 143,000 who have entered Greece so far from Turkey in boats, are trapped in the country because of border closures on the Balkan route to Europe’s prosperous heartland. About 12,000 are in the greater Athens area.

Yesterday, Jolie turned up in a downpour at a Lebanese refugee camp yesterday to demand world leaders bring an end to the five-year-long conflict in Syria.

She branded delays over a peace deal were ‘tragic and shameful’.

Miss Jolie’s Hollywood grin and movie premiere-ready figure looked decidedly out of place in a camp which thousands of Syrian refugees are forced to call home.

Well, whatever you think of Angelina Jolie, her mission is clearly to better humanity – even if she’s going about it in a strange way.