People will go to crazy lengths to achieve the body of their dreams, like this man who was essentially cooked from the inside out[1] after using a diet pill to burn fat. 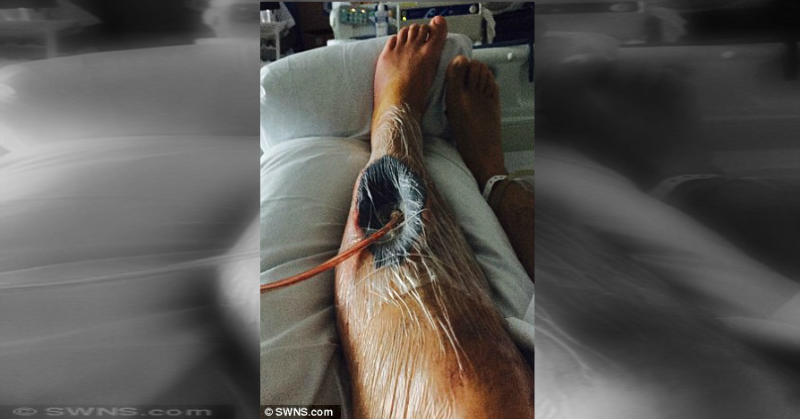 A father who was desperate for the perfect ‘beach body’ overdosed on diet pills and was given hours to live.

Lewis Brown, 25, from Haverhill, Suffolk, took a large amount of the controversial DNP pills to help him lose excess, for him to add more muscle, after becoming obsessed with working out.

He even took steroids to go from a healthy 10 stone to a 15-and-a-half stone frame.

But when he turned to the ‘fat burners’ the poisonous chemicals increased his body temperature to 42 degrees and was ‘cooking’ from the inside.

Worried doctors at Addenbrooke’s Hospital in Cambridge were forced to put Mr Brown in a coma while they covered him in ice.

But when his muscles started to die, his devastated family were called to say goodbye.

Miraculously he pulled through, but not before medics were forced to cut out a leg muscle which had died.

Mr Brown said: ‘I was so out of it about getting bigger that I thought I was unstoppable.

‘I just wanted to be better than anyone else.

‘I was a different person then – everyone has said. All I was interested in was getting bigger and I just didn’t know what I was doing.

‘I remember seeing a story about DNP and people who died and just thinking they weren’t taking them right.

‘But I have done it myself now and I can tell you, you just get caught up in it so quickly.

The near-fatal dose was the exact number taken by student Eloise Parry, 21, from Shrewsbury, who died just months earlier.

For those not familiar with the lingo:

Thankfully he survived and learned a lesson from this whole thing; and hopefully people can learn from his vanity.