One man is doing everything he can to raise awareness for SIDS[1] after receiving a call to go to his own home, where his infant son had been found dead in his crib. 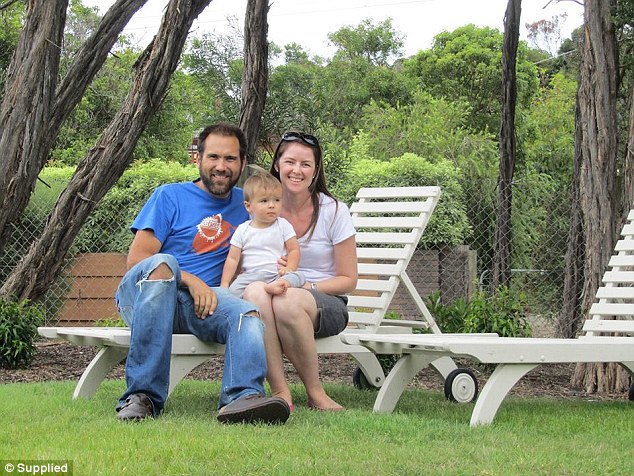 Paramedic Pete Keach, 36, was attending an emergency an hour away from home when an emergency call came through the system that would change his life forever.

Mr Keach’s wife Georgie, 37, had called for an ambulance after their little boy Sam was found lifeless in his cot.

Mr Keach knew the call had come in on the emergency line and that it was from a home in his area, but at that stage he did not know the details.

‘I heard the call come over the radio and I knew that if it wasn’t Sam it would be one of the kids from the mother’s group,’ Mr Keach, from Rye, Victoria, told Daily Mail Australia.

‘I tried to call Georgie but the home phone wasn’t answering.

‘So I tried to call the mobile, it was engaged so I just hoped Georgie was talking to her sister.

‘But I found out later she was on the phone to the 000 call centre.’

When he couldn’t get on to his wife he contacted despatch who told him the call had been made from his address.

He had only been away from home for 45 minutes and his whole world had changed. His little boy had died of Sudden Infant Death Syndrome (SIDS).

He immediately arranged to meet another ambulance so the paramedic on board could take over the care of the patient in his care, so he could get home to his family.

By 10pm he was pulling in to his street.

‘It sounds a bit cliché but it was a dark, windy, rainy night,’ Mr Keach said.

‘I turned the corner and saw three ambulances; their lights lighting up my street like a Christmas tree.

‘My ambulance made a total of four.

‘I saw my neighbour and father in-law on the deck, by this time I knew the outcome and I could tell they did too.

‘When I went into the house I walked past three of my colleagues who had attempted to resuscitate Sam.

‘I found Georgie in Sam’s room with her mother. We sat there and cuddled him and kissed him.

‘He never liked kisses and cuddles much but when he was dead we could give him as many as we wanted and he couldn’t squirm away from us.’

Mrs Keach had been sure Sam was dead before she called the ambulance, but wanted to make sure she did everything in her power not to let her first and only child die.

This tragic series of events occurred in June 2012.

Since then the couple have had two girls, Lucy, 1 and Anna, 2 and have learnt a lot about how to prevent SIDS, only relaxing a little when Anna passed the 21-month-mark.

The paramedic has since attended his first-ever SIDS call-out and on Friday, April 8th, he will be riding for a SIDS charity for which the proud parents have raised over $19,000.