Not Surprising: Age SIX And He’s Being Groomed For Jihad. Surprising: In British Suburbia

Ibrahim Anderson is grooming his son, six, for violent jihad in the middle of British suburbia. Photos of his son and other children[1] posing in front of the ISIS flag make you wonder “who could knowingly send their children to die?” 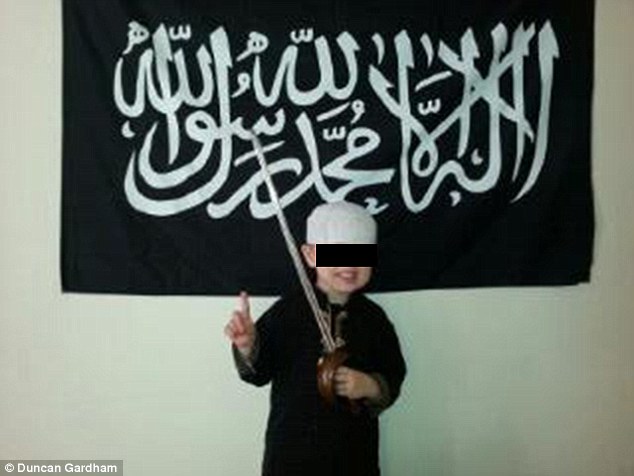 Beaming at the camera with an angelic smile, this little boy is at first glance a picture of innocence.

But though he is only six years old, and lives in the heart of British suburbia, he and his siblings are being groomed to support barbaric Islamic State terrorists.

In exclusive pictures obtained by The Mail on Sunday, the children are shown posing in front of the jihadis’ ‘black flag of Islam’ and brandishing a sword.

Terrible footage has already emerged of young children groomed to support IS in Syria and Iraq – but this boy was photographed inside a terraced house in suburban Luton. He was posing at the behest of his father Ibrahim Anderson, one of Britain’s most infamous jihadi Muslim converts.

Anderson was convicted at the Old Bailey on Friday of ‘inviting support for IS’ in the first successful case of its kind. Disturbingly, his son is holding a sword in his left hand, apparently ‘paying tribute’ to the late executioner Jihadi John, who cut the throats of his victims holding a hunting knife in the same hand. The boy also raises his right index finger, mimicking a gesture jihadis use to signify their one God.

In another picture, the boy’s older brother, eight, can be seen in a similar pose, brandishing a sword in front of the black flag, while wearing a Western T-shirt emblazoned with Kermit the Frog. The third photograph shows their toddler sister, said to be under three. Wearing a pink hijab despite her age, she smiles at the camera while perching on the back-rest of a sofa.

The black flag of Islam contains the Arabic words: ‘There is no god but Allah, and Mohammed is the Messenger of Allah.’ But it has been appropriated by extremist groups. In the UK, it was routinely used in demonstrations by Al-Muhajiroun, the banned group which wanted to raise it above 10 Downing Street. These pictures were taken on Anderson’s mobile phone in October 2014 and were discovered by detectives when they raided his home two months later. They were shown to the jury at his trial.

Born Andrew Anderson, he converted to Islam while serving three years in jail for a petrol station robbery in the late 1990s. He had previously been jailed for car theft. Before his arrest he was living with his wife, the mother of the children, in the Bury Park area of Luton. She too is a British convert and grew up in Nottingham.

This is enough to make any sane person sick to their stomach.