A Saudi teenager set to be beheaded because he attended a protest when he was just 15 years old has pleaded for help with his family. The outrageous punishment certainly is not fitting for the crime committed[1]: 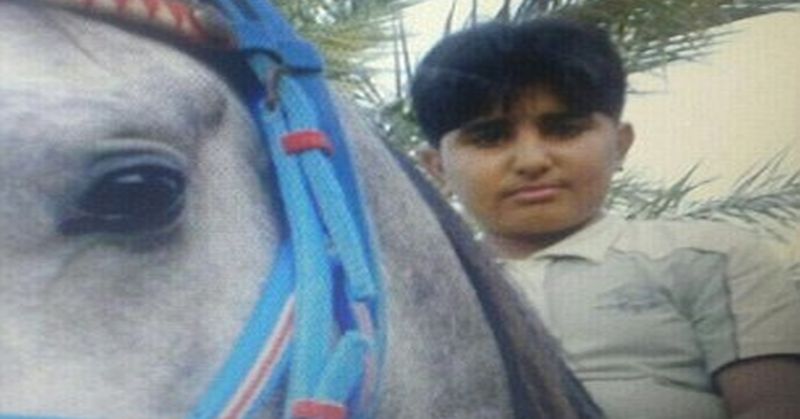 Abdullah al-Zaher, now 19, was arrested in March 2012 after attending protests and is said to have been beaten and then tortured into signing a confession without being allowed to read it or consult with his parents or a lawyer.

He faced a range of charges from ‘harbouring’ protesters, participating in demonstrations and chanting slogans, to ‘concealing the offence of incitement’, setting fire to a car, and throwing petrol bombs.

Zaher was sentenced to beheading in Saudi Arabia’s secretive Specialized Criminal Court in 2014 and his sentence was upheld this year, according to the human rights organisation, Reprieve.

The prosecutor requested that Zaher be crucified after he is beheaded.

Zaher is currently in solitary confinement awaiting execution, which it is feared could happen at any time.

He is thought to be the youngest person at the time of arrest to be given a death sentence in Saudi Arabia.

Zaher’s father, Hassan al-Zaher told The Guardian, ‘Please help me save my son from the imminent threat of death. He doesn’t deserve to die just because he participated in a protest rally.’

He said Zaher had told him he had not thrown Molotov cocktails or ‘anything similar’ at the protest.

Zaher’s father told The Guardian his son is popular and peaceful and that he went to the protests not really knowing what they were about.

‘He did not go there with the intention of fighting or opposing the government, in his eyes it was just a simple protest rally,’ he added.

Reprieve, which is assisting the juveniles, has asked UK Foreign Secretary Philip Hammond to intervene in Abdullah’s case and those of Ali al-Nimr and Dawoud al-Marhoon, who were also juveniles when they were arrested at protests.

This should just not be allowed to happen anywhere in he world, right? Why is this young man being made an example of? Just sickening. Of course, there will be no justice for him unless by some miracle Reprieve can help.