Video: Drunken Russian Makes The Biggest Mistake Of His Life When He Tries To Pet Caged Bear

A lot of people make a lot of dumb decisions [1]when they’re drunk, but this guy really takes the cake. In this case, that ISN’T a good thing. 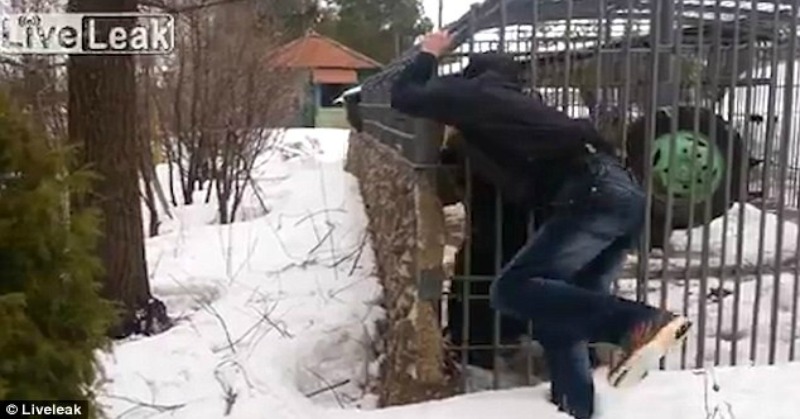 This is the moment a Russian had his hand ripped off by a caged bear – after ignoring his friends’ warnings and reaching in to stroke the animal.

Footage taken in Murmanskaya Oblast, in the country’s far north west shows the man screaming out in pain as the bear clamps its teeth around his arm.

Seconds earlier his friends had shouted ‘you f***ing idiot, don’t do it!’ as he approached the giant animal.

The brown bear took hold of his arm and stood up on its back legs as it yanked the man from side to side with its jaws.

Video posted on Live Leak starts by showing the bear standing still in its cage before a man in a black jacket and jeans approaches while people swear in the back ground.

The man cautiously puts his right arm through the bars as if attempting to stroke or pat the creature.

Moments later the bear strikes, grabbing hold of the man and stands up as the victim struggles desperately to free himself.

Incredibly, the cameraman appears to carry on filming before suddenly dropping the device and running over to help amid screams of panic.

I don’t know, if he didn’t listen to our words of warning before and continued to reach his hand into the bear cage, I would probably be a little slow to help him too. Maybe help him learn his lesson.