Even The Huffington Post Is Calling For Eric Holder To Go

America lost its AAA credit rating for the first time since 1917.

Tea Partiers were targeted by the IRS.

Hundreds of Mexicans and at least one American died because of the Obama Administration’s incompetence in Fast and Furious.

Americans died in Libya because of the Obama Administration’s incompetence.

Then the Obama Administration targeted some reporters.

Suddenly, liberals cared because there was finally something that might impact them. 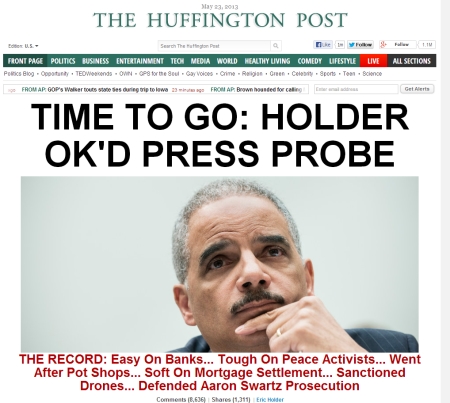 The report places Holder at the center of one of the most controversial clashes between the press and the government in recent memory. The warrant he approved named Rosen as a “co-conspirator” in a leak investigation, causing many to warn that the Justice Department was potentially criminalizing journalism. The warrant also approved the tracking of Rosen’s movements in and out of the State Department, as well as his communications with his source, Stephen Kim.

The Justice Department later said that it did not intend to press any charges against Rosen.

…The revelation came hours after President Obama said in a speech that he was concerned about the potential implications of the Fox News and AP investigations. Obama said that Holder would be reviewing the department’s rules for investigations that involve reporters.

Why does the Huffington Post care about this? Why do other liberals care? Because they can easily see themselves ending up on the wrong side of a DOJ investigation. That being said, even if they’re doing the right thing for the wrong reason, it still hurts Obama and helps America. So, we’ll take it.