You know what, we don’t need freaking gun control. We need liberal, communist control. If I had to bet on it, I’d say the shooter in Vegas was a Rachel Maddow-loving liberal who hates Trump. Just my two cents. And here come the celebrities, one after another calling for gun control. These people are dumber than a box of rocks and that’s insulting to the rocks. They wasted no time in taking their fascist cause to social media. Just a couple of hours after 58 were killed and over 500 were wounded, they were screaming for gun confiscation and gun control. Every Hollywood-wannabe of any fame or not got into the act. You know… the ones who have armed security and live behind walls and gates, so no one can get to them.

You could just feel celebrities drooling and hyperventilating as they realized that a bunch of people were gunned down at a country music festival on the Strip across from the Mandalay Bay. They don’t care about those people – they figured they were all redneck conservatives, so good riddance. The shooter, a 64 year-old gambler, had over ten guns and cameras to let him know when the police arrived. He killed himself before SWAT could get to him in his room on the 32nd floor of the Mandalay Bay. He sprayed fire into a crowd of more than 22,000, raining death down on them. And Hollywood is gleeful this morning over it. 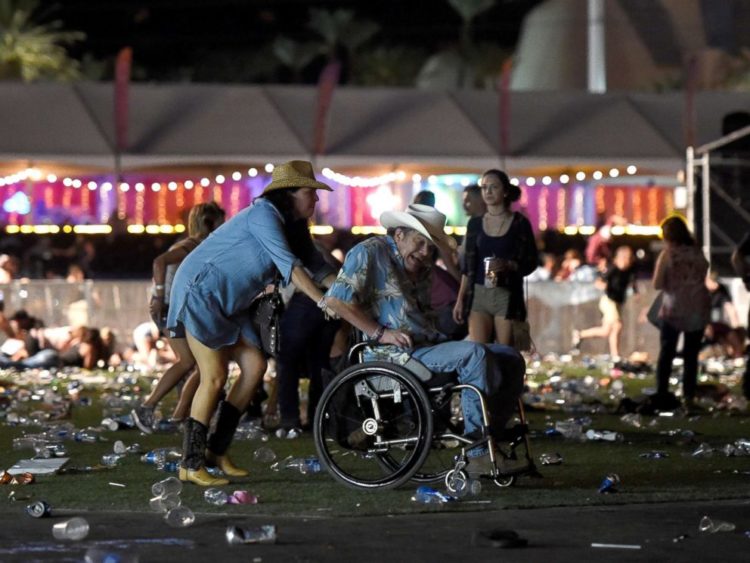 Celebrities set Twitter on fire over gun control. Lady Gaga tweeted Monday, “Prayers are important but @SpeakerRyan @realDonaldTrump blood is on the hands of those who have power to legislate. #GunControl act quickly.” Gun control does not work. All it does is takes guns from law-abiding citizens and leaves them at the mercy of bad guys, who are going to get guns regardless of whatever gun control is implemented. Even William Shatner, who I like, showed a compelling lack of knowledge concerning guns. “Star Trek” actor William Shatner tweeted to his fans, “Why would you need an automatic weapon for self protection? If that many people were coming after you then you have much bigger problems.” You need a special permit, an FBI background investigation and a $200 stamp to get one. And…. it can’t have been manufactured after 1968.

By far the worst was Hillary Clinton. “The crowd fled at the sound of gunshots. Imagine the deaths if the shooter had a silencer, which the NRA wants to make easier to get,” she tweeted, adding: “Our grief isn’t enough. We can and must put politics aside, stand up to the NRA, and work together to try to stop this from happening again.” That was an “ignorant” and “irrelevant” statement going after the NRA and silencers in the hours after the Las Vegas mass shooting. A bunch of other communist politicians also feigned outrage over something they know nothing about.

“Suppressors only reduce by a few decibels, still same decibel level as a jackhammer,” tweeted Dana Loesch, a talk radio host and NRA spokeswoman. Conservative commentator Ben Shapiro, editor in chief of The Daily Wire, blasted Clinton’s tweets as “Ignorant, irrelevant and exploitative.” Radio host and CIA veteran Buck Sexton had a similar take: “Appallingly stupid, and entirely irrelevant, Mrs Clinton She knows nothing about firearms, and even worse, she doesn’t care.” This is sheer political opportunism on Clinton’s part. Never let an emergency go to waste… especially when you can stand on cooling bodies to make use of it for gun control.

Today marks the first, fresh day of being told now isn't the time to discuss gun control after the newest worst mass killing in America.

I will also do everything in my power to get Congress to pass comprehensive gun reform so these types of tragedies don't happen anymore.

The 5 Gun Safety Regulations That Even NRA Members Support – https://t.co/ls4vQC1mYR[6]

Thinking of Vegas. And thinking of common sense gun control laws. Sickening news to wake up to.

It would be wise to ban assault weapons, high-capacity magazines and silencers. None of which is excessive. https://t.co/oaPIk4lbWO[14]

Big test for President Trump.
The @NRA[9] helped elect him, now worst ever US mass shooting has happened on his watch. #vegas[26]

Why would you need an automatic weapon for self protection? If that many people were coming after you then you have much bigger problems. https://t.co/reTcyerOAl[30]

The NRA is a terrorist organization. There's no other way to say it.

The crowd fled at the sound of gunshots.

Imagine the deaths if the shooter had a silencer, which the NRA wants to make easier to get.

Suppressors only reduce by a few decibels, still same decibel level as a jackhammer. https://t.co/aj0AvJMZwv[34]

She knows nothing about firearms,
and even worse, she doesn't care. https://t.co/SA2dfdTax4[38]

what a tone-deaf political hackhttps://t.co/iiN4J7bGzg[40]