In The Age Of Trump, Sheriff’s Are Emboldened To Be Tough On Criminals 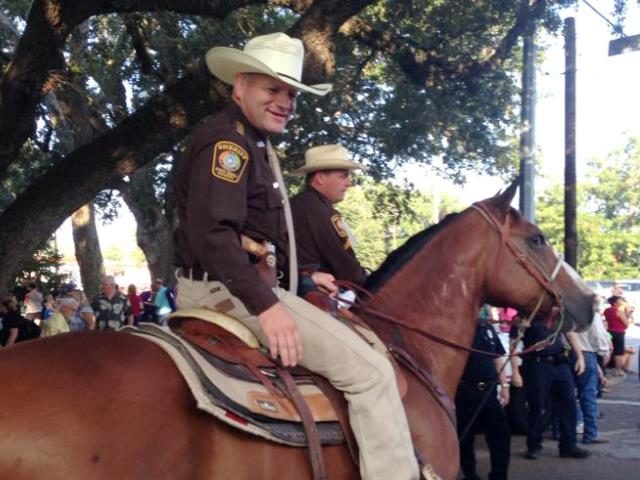 Emboldened by Trump, sheriffs are mimicking his rhetoric and putting some residents on edge

With his red “Make America Great” hat now prominently displayed in his office here in Titusville, Ivey is part of a wave of county sheriffs who feel emboldened by President Trump and his agenda, becoming vocal foot soldiers in the nation’s testy political and culture wars.

From deep-blue states such as Massachusetts and New York to traditionally conservative strongholds in the South and the Midwest, locally elected sheriffs have emerged as some of the president’s biggest defenders. They echo Trump’s narrative on everything from serious policy debates such as immigration to fleeting political dust-ups with NFL players who kneel during the national anthem.

With Trump dominating the national conversation through tweets, sheriffs are mimicking his antagonistic political style, alarming progressives and some legal observers who fear an increasingly undisciplined justice system. Some have even gone to battle with Democratic officials, bucking their “politically correct” policies and using rhetoric that puts some residents on edge.

Those residents would be illegal aliens and criminals

“Members of law enforcement and sheriffs seem to be more comfortable articulating controversial, pro-incarceration views than in recent years,” said Daniel Medwed, a law and criminal justice professor at Northeastern University in Boston. “When you have a president who feels comfortable saying things that people would not have said in previous regimes, it emboldens other people to say those things.”

Over the past nine months, various elected sheriffs have been filmed saying that they would call Immigration and Customs Enforcement on undocumented residents, have threatened to bar sex offenders[2] from hurricane shelters, and have proposed [3]sending inmates to help build Trump’s planned Mexican border wall.

And? I’m not seeing the problem here, but, I’m not pro-criminal.

But legal analysts and other observers are surprised that the breadth and political clout of conservative sheriffs appear to be growing stronger, reflecting the coarsening of debate in the United States.

Goodness, law enforcement officials wanting to enforce the law? To get tough on crime and criminals? To make punishment painful? How terrible!!!!!1!!!!

What the article is even more upset with is that so many Sheriff’s are Trump supporters and Republican voters. And that they want to actually enforce Constitutional provisions, rather than squishy, extra-Constitutional laws emanating from Washington.

Of course, there are still some Democratic Party Sheriff’s in the Dem big cities. And look what’s happening with their crime rates.