Thug Playing The “Knock Out Game” Gets Shot Twice 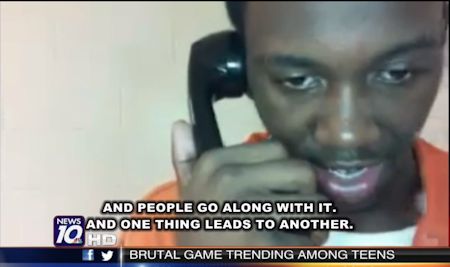 A game called “Point-em-out, Knock-em-out” has made it’s way to Lansing, and it’s exactly how it sounds. The game consists of someone being randomly targeted, then attacked.

It’s a game that’s been growing with popularity on the internet, with teenagers filming themselves punching unsuspecting victims. Lansing had it’s first case of the game brought to light this summer, but it’s possible it’s been happening under the radar for months.

On February 26th a man waiting for his six-year-old daughter to to dropped off from school had no idea he would be the city’s first reported victim.

“I saw the van circle twice and the second time three came out. I didn’t suspect anything. I hadn’t any enemies, or any reason to believe they would be looking to do anything to me.”

We are not revealing the victim’s identity for his protection.

The victim was attacked by 17-year-old Marvell Weaver. But Weaver did more than try to knock his victim out, he tried to do it with a taser. Luckily for the victim, the taser didn’t work and he was able to protect himself with his concealed-carry .40 caliber pistol.

Weaver was shot twice, in the leg and an inch away from his spine. He’s been sentenced to a year in jail for the attack, but he admits he’s getting off easy.

“It was just a lesson learned. I wish I hadn’t played the game at all,” said Weaver.

But Weaver say’s this wasn’t the first time he’d played it. Before he was caught, he and his friends had attacked random people on several occasions.

“Not many, six or seven. It wouldn’t be an every day game, just a certain game to be played on certain days. You don’t even try to rob them or anything. That’s the game,” said Weaver.

Weaver says it’s not gang related, teens are playing it because they’re bored. Plus, they’ve been seeing others doing it and getting away with it on the internet.

He says he used to play it because he was usually dared, while high and with a bad group of friends.

“They weren’t my normal group of friends. Someone just throws it out there and people go along with it. One thing leads to another and it just goes all down hill,” said Weaver.

Weaver said they liked to target crowds because it would be easier for them to get away. It could be played during the day or night, and it didn’t matter who the victim was, man or woman, old or young; anyone could be a potential target.

He had no idea that playing it would one day almost cost him his life, and land him in jail.

Shot twice and spending a year in jail for trying to “knock out” random strangers for fun. That sounds about right.