And the citizens of Baltimore are surprised by this[1]? As one astute commenter at TheBlaze said: Be careful what you wish for… [email protected] Riots in the streets, charging officers with everything they can throw at them, attacking the police force at every turn and attacking the officers themselves… this was utterly predictable. Lynch mobs demanding the heads of cops on pikes because some scumbag dealer dies in a van while hyped up on his own inventory and they are shocked over this? No facts proven, no solid evidence to charge these officers with, but the Mayor and her toadies did so anyway. Baltimore’s so-called leadership has destroyed the city, the citizens’ safety and the police force there all in the name of a Marxist political agenda and the oh-so-obvious nationalization of our police forces. 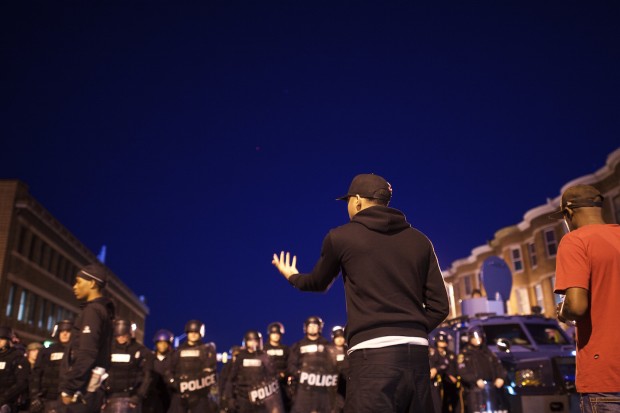 A protester faces off with police the night after citywide riots over the death of
Freddie Gray on April 28, 2015 in Baltimore, Maryland. (Photo by Mark Makela/Getty Images)

BALTIMORE (TheBlaze/AP) — A 31-year-old woman and a young boy were shot in the head Thursday, becoming Baltimore’s 37th and 38th homicide victims so far this month, the city’s deadliest in 15 years.

Meanwhile, arrests have plunged: Police are booking fewer than half the number of people they pulled off the streets last year.

Arrests were already declining before Freddie Gray died on April 19 of injuries he suffered in police custody, but they dropped sharply thereafter, as his death unleashed protests, riots, the criminal indictment of six officers and a full-on civil rights investigation by the U.S. Justice Department that has officers working under close scrutiny.

“I’m afraid to go outside,” said Antoinette Perrine, whose brother was shot down three weeks ago on a basketball court near her home in the Harlem Park neighborhood of West Baltimore. Ever since, she has barricaded her door and added metal slabs inside her windows to deflect gunfire.

“It’s so bad, people are afraid to let their kids outside,” Perrine said. “People wake up with shots through their windows. Police used to sit on every corner, on the top of the block. These days? They’re nowhere.”

West Baltimore residents worry they’ve been abandoned by the officers they once accused of harassing them, leaving some neighborhoods like the Wild West without a lawman around.

“Before it was over-policing. Now there’s no police,” said Donnail “Dreads” Lee, 34, who lives in the Gilmor Homes, the public housing complex where Gray, 25, was chased down. “People feel as though they can do things and get away with it. I see people walking with guns almost every single day, because they know the police aren’t pulling them up like they used to.”

People were quick to note that Baltimore residents seemingly wanted police out of their neighborhoods before the violence spiked.

#Baltimore[2] Officer: “It seems like the citizens would appreciate a lack of police presence & that’s exactly what they’re getting.” #Hannity[3]

You don't want the police to police and this is what you get #Baltimore[2]. Maybe Al Sharpton and your little Mayor can start patrolling.

Baltimore gets bloodier as arrests drop post-Freddie Gray. Police, afraid to do their jobs, "nowhere to be seen." https://t.co/OsdA07XMOQ[8]

The reason we have police in the first place is because our nature is such that we will not police ourselves. Just look at Baltimore now.

But Police Commissioner Anthony Batts said his officers “are not holding back,” despite encountering dangerous hostility in the Western District.

“Our officers tell me that when officers pull up, they have 30 to 50 people surrounding them at any time,” Batts said.

Before and during the riots, these people demanded that the police go away. Now, they demand they come back, but police them selectively. Screw that. Officers are now being surrounded in their cars by 30 to 50 thugs when they stop. You think these officers don’t fear for their own lives? And when they are not in physical jeopardy, they’ve got the Mayor and the DOJ, led by Al Sharpton, breathing down their necks and threatening them. Tell me how their paltry salaries are worth this? I wouldn’t blame every damn one of them for walking away. Baltimore can rot, most of it already has and the soaring murder spree continues.