Muslim Terror is HERE: Fort Hood Victim Says Obama Needs to Get his ‘Head Out of His A**’

A man who was shot during the Muslim attack on Fort Hood in 2009 says that Muslim terrorism is here in the USA and Obama needs to get his head “out of his ass” and fight it. 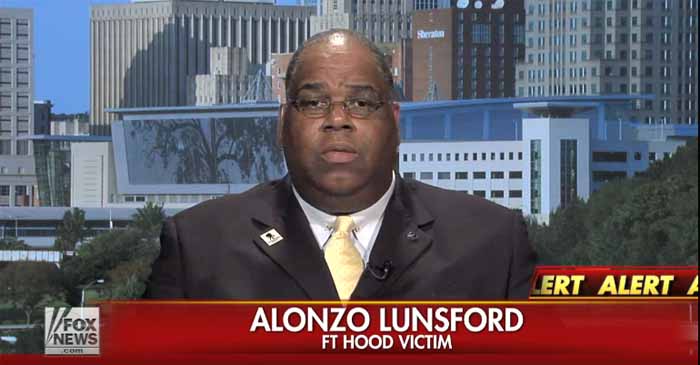 Sgt. Alonzo Lunsford, who survived being being shot seven times by Muslim “Major” Nidal Hasan, said that “war is here on our soil” in a recent interview. And he went on further[1] to accuse Obama of ignoring the truth.

Saying the “war is here on U.S. soil,” a victim of the 2009 Fort Hood attack by Army Major Nidal Malik Hasan described the killing of four U.S. Marines in Chattanooga, Tennessee, on Thursday as “an act of terror.”

He said the threat won’t go away until it is eliminated.

Sgt. Alonzo Lunsford, who survived being shot seven times by Hasan, appeared Friday on Fox News’ “Your World,” and told host Charles Payne the White House needed to call this attack what it truly was.

“They need to get their heads out of the fourth point of contact and call it what it is,” Lunsford said of the Obama administration.

The “fourth point of contact” is Airborne military jargon for the derriere, which is a somewhat more polite way of telling Obama to get his head out of his **s.

“As long as they drag their feet, people die,” Lunsford said. “Now, we predicted this would happen years ago. It happened here in the United States and in England as well.”

The Sgt. also said we need to arm our soldiers in recruiting facilities “like we did before.”