Restaurants in Sydney, Australia have been foolish enough to demand that no bacon be served in order not to upset the delicate mental balance of the Muslim population. But one customer ordered bacon on his sandwich, anyway. The result was a Muslim Kentucky Fried Chicken employee who began to scream and threaten the customer for daring to even mention the word “bacon.” 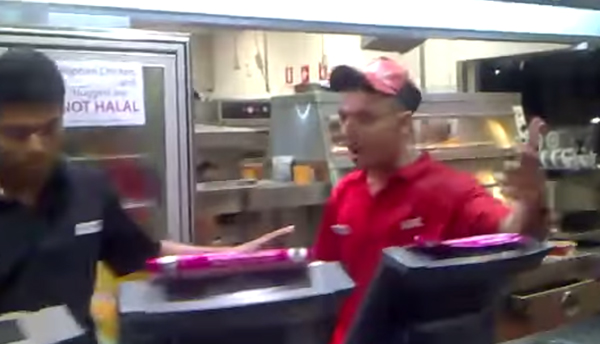 Once the customer[1] uttered the dreaded “B” word, the employee begins to scream “I’m gonna f***ing break your head bro!”

He was also unhappy that he was being recorded.

I guess Muslims don’t mind an occasional video of the beheading of a westerner, but don’t turn the tables on them by using video to expose their hate.

The employee was ultimately suspended for his disgusting tirade, but it still doesn’t make up for the fact that a supposedly western nation like Australia has bowed to Islam like this.

How long will it be before liberals in the USA begin to force restaurants to observe Islamic “law”?