Apparently bored with hate hoaxes, moonbats have branched out into active shooter hoaxes. From Los Angeles:

A USC professor suffered “some sort of an episode” that caused students to believe there was an active shooter at school, triggering the campus scare and police response on Monday, police said.

LAPD Deputy Chief Phillip Tingirides said the professor, who was not identified, told her students to lock the doors and get on the floor. Then, she began yelling, “active shooter.”

Students alerted the police, who soon determined that there was no shooter.

Tingirides said the professor was in LAPD custody.

“We’re trying to figure out what our best course of action is going to be with her,” he said.

Whatever you do, don’t put her back in the classroom.

Tingirides said he does not believe this was some kind of test or drill.

I’m guessing the professor teaches something in the liberal arts, probably gender studies. 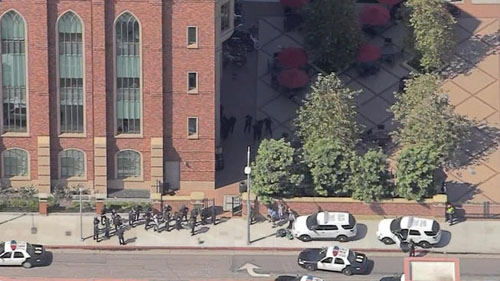 Wasting police resources on a prof’s mental issues, via KNBC.