Your mind can cripple you.[1] I really feel for this woman… how horrific it must be to not be in control and have this happen. It tugs at your heart. I won’t pretend to know much about autism. I have friends who have children with it. It seems to cover a whole range of conditions and many times, pets are very, very critical in handling the repercussions of an attack or episode. They not only comfort and calm down the person who is going through the event, they also save lives of those afflicted with autism. I don’t believe professionals really even know the causes of autism… I suspect it can come from a variety of triggers such as diet, your surroundings and physical/mental conditions. What I can see is that it is devastating to the person suffering from it. 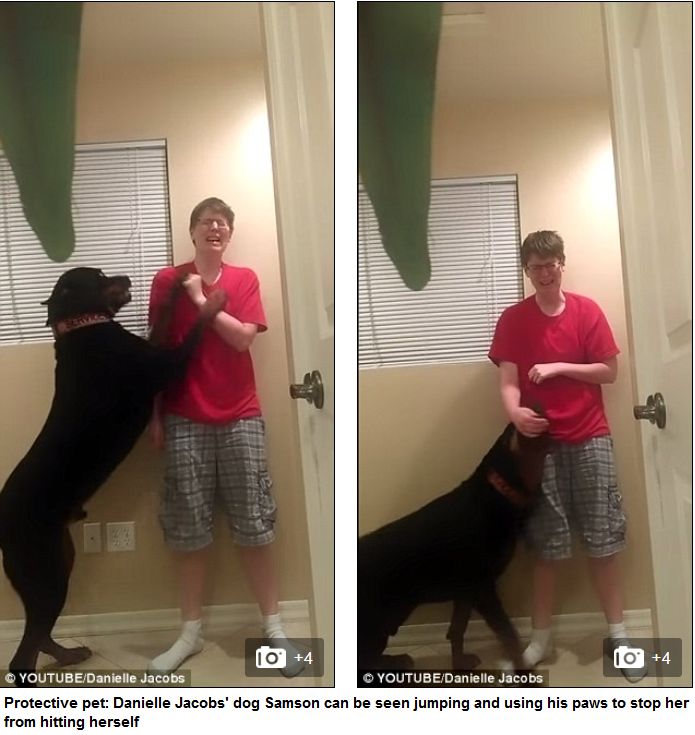 A woman with Asperger’s syndrome has bravely filmed herself being comforted by her service dog as she suffers a depressive episode in hopes of raising awareness to what it is really like to live with the autism spectrum disorder.

Danielle Jacobs posted the footage of the intensely personal moment on her YouTube[2] channel two weeks ago, asking viewers to refrain from leaving negative comments about her experience.

In the clip, her loyal dog Samson, who is trained to stop her from self-harming, can be seen using his paws to keep Danielle from hitting herself.

‘This is what having Asperger’s is like,’ she wrote in the video’s description. ‘Please no negative comments this really happened and it’s not easy to open myself and share what it’s like on a daily basis.’

The video begins with Danielle, from Arizona, standing and crying as she pounds her chest with her fist. Samson immediately jumps up and uses his paws to pull her arms down.

Danielle continues to sob, and soon, she is repeatedly hitting her head with the palm of her hand. One again, Samson jumps on his two feet as he pushes her hands away.

When Danielle finally sinks to the ground, Samson curls up next to her and licks her face.

‘This is what’s considered a meltdown,’ Danielle explained of the footage. ‘Yes, Samson is alerting. I trained him to alert to depressive episodes [or] self harm [but] not both, but [still] he alerted.’

She added: ‘It appears the response is late, but it’s actually supposed to be as I’m coming out of the meltdown as I tend to have a panic attack after.’

It is one of a number of videos she has posted about her experiences with the condition, including one where she is devastated at not being given support in quest for a college education.

The latest video has been viewed more than 600,000 times since it was posted on YouTube, with many people commending Danielle for sharing such a private moment.

‘As an older brother to a 13-year-old boy with autism, this is truly heart-warming and powerful. Thanks for sharing,’ one person wrote before adding: ‘EDIT: I didn’t realize that YOU are the one who uploaded this video! Very courageous of you to do so. You are very lucky to be so intelligent and highly-functional with ASD. Best of luck to you in life! [sic]’

Another commenter whose son has autism agreed.

‘It is very brave of you to share your most fragile moments with the world,’ he wrote. ‘My son has Autism and his meltdowns are also heartbreaking to watch. Many, many people who have heard about meltdowns but, have never actually seen one, will finally understand how traumatic they can be. Thank you! [sic]’

He added: ‘Also, this is another example of how our pets are emotionally connected to us much more than we may realize. Your dog is awesome.’

And many other noted how wonderful it is that Danielle has Samson to turn to in times of need.

‘It’s great to see you have such a great pup there for support!’ one commenter noted. ‘Sometimes the greatest help comes from man’s best friend.’

Most of us take our relative normality for granted. We don’t have outbursts or meltdowns – just stress and worry. Danielle is very brave for sharing something so personal in an effort to help others. I wish there was a way to magically make something like this just stop. This is something that could happen to anyone or touch any of our families. It’s nightmarish. Samson obviously loves her and is there for Danielle as no one else can be. That’s true love and devotion. That alone can help heal many, many wounds of all types. I hope that Danielle also finds support in her family and beyond. Samson is a hero and living proof there is no better friend you can have by your side.