Deporting Illegal Aliens Is Persecution Or Something 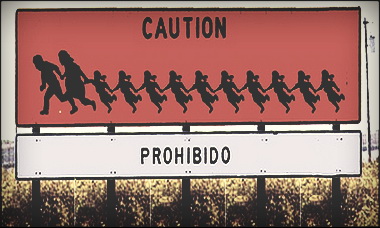 The Hill has give Cesar Vargas, the first illegal alien admitted to the NY bar, a platform to complain about people not giving illegal aliens a break. You know, people who are unlawfully present in the U.S. And, it’s exactly this kind of stupidity that makes people harden their positions against folks like the so-called Dreamers

We can’t be complicit in persecution of immigrant communities[2]

Yesterday, my mom and I sat at the kitchen table to discuss the White House’s latest demands for an immigration deal.

The administration says it will refuse to protect “Dreamers,” undocumented immigrants who were brought to the country as children, unless it gets a southern border wall, 10,000 new immigration agents, tougher laws on asylum seekers as well as extended families of immigrants and a right to deny federal grants to sanctuary cities.

The bottom line, as far as we could tell, was that the administration is looking to broaden how it targets, arrests and deports immigrants. As she served brown rice and boiled eggs for breakfast, my mother said calmly, “Si los ayuda a ustedes, no me importa lo que me pase a mi.”

It means, “if it helps you, I don’t care what happens to me.”

It speaks to her self-sacrifice: My mother would rather jump into the cross-hairs of an aggressive deportation regime than do anything that might prevent my younger brother and I from becoming citizens.

Her “self sacrifice” was crossing the U.S.-Mexico border with Vargas and several siblings illegally[3].

What the White House is asking for is the chance to persecute some immigrants in exchange for pledging to protect others. That kind of deal would only fuel a dangerous narrative about the good immigrant versus the bad immigrant, pitting better-educated immigrants against other undocumented individuals — people like my 74-year-old mother, Central American children and day laborers.

Here’s an idea: if Cesar doesn’t like that were are willing to consider some sort of legal status for those illegally brought by their parents when they were kids, well, let’s deport them all! As one wrote in the comments at The Hill “I’m so tired of illegal aliens making demands, I demand they leave my country.” Rather than being humble and contrite, and asking “please”, illegal aliens like Vargas pull a schtick of demands and insults. Do you help people who do this to you? Or do you tell them to go away? These people are not “immigrants”: per federal law, they are illegal aliens, and the law requires that they receive a small fine and be deported.