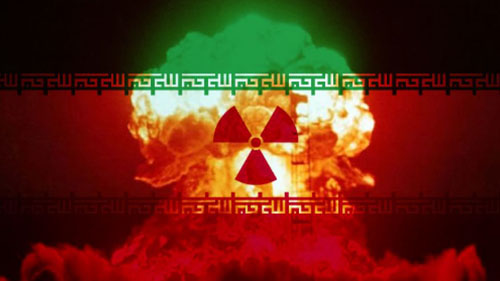 It would be great if the deal with Iran actually stopped Iran from developing nuclear weapons. But, the inspection methods are entirely too weak, and it will allow Iran to seek nuclear weapons in less than 10 years per the details of the deal. But, they were supposed to stop doing research and development now. How’s that working out?

(Fox News[2]) President Donald Trump is expected this week to “decertify” the Joint Comprehensive Plan of Action (JCPOA), better known simply as the Iran deal, declaring that the agreement reached in 2015 by the U.S. and five other international powers is not in America’s national interest. The matter will then be tossed back to Congress, which will have 60 days to decide whether to reimpose hefty pre-2015 sanctions.

While the President’s likely move has generated wide condemnation from foreign policy leaders — who reiterate that the United Nations nuclear watchdog agency, the International Atomic Energy Agency (IAEA), has maintained Iran is in compliance — a new 52-page investigative report by the National Council of Resistance of Iran[3] (NCRI), entitled: “Iran’s Nuclear Core: Uninspected Military Sites,” obtained exclusively by Fox News and slated for release Wednesday, asserts that the country’s nuclear weapons program has far from halted.

“It has been known for years that Iran has two nuclear programs — one is civilian and the other, the military, has the goal of giving Iran its first nuclear bomb,” Alireza Jafarzadeh, deputy director of the Washington office of the NCRI, also referred to as the Iranian Resistance, and considered the primary opposition coalition to the clerical administration of Iran, told Fox News. “The civilian sector of the nuclear program has systematically provided a plausible logistical cover for the military sector, and acts as a conduit for it. The military aspect of the program has been and remains at the heart of Iran’s nuclear activities.”

In a nutshell, the report and long article highlight that military sites have continued to do R&D into developing nuclear weapons.

“The more we investigated, the more we realized that the weaponization program is fully operational,” Jafarzadeh said. “The military sector has gone through changes in name, location and reorganizations over the years. However, it has never halted its work and key figures in the sector have remained unchanged.”

One of the key issues of the verification process, the report states, has been access to Iran’s military sites. The regime’s highest officials — from Ali-Akbar Velayti, a foreign policy advisor to Ali Khamenei, the current Supreme Leader of Iran, to Gholam-Hossein Sa’edi, brigadier general of Iran’s elite IRGC, have stated publicly over the past month that they will continue to refuse to allow IAEA inspections of their military sites.

How do we know they’re in compliance if they won’t allow inspections? Obama and the other nations that signed on basically gave up long term security for appearing to have Done Something. It was a lop-sided deal, one which Iran won.

What will President Trump do? We’ll find out within a few days.