Emotional Tea Party Witness At Congressional Hearings: “I’m Not Here As A Serf Or A Vassal. I’m Not Begging My Lords For Mercy.”

The drunk-with-power bullies at the IRS acted like little boys pulling the wings off of flies when they were dealing with Tea Party Groups. They thought they could do anything they wanted and nobody could do anything about it because after all, they were the IRS. They got away with it, too, for a little while. 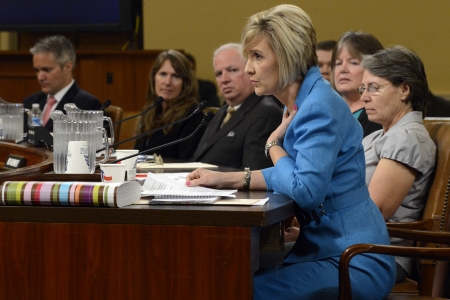 But now, some of their victims like Wetumpka Tea Party President Becky Gerritson, are getting to tell their stories publicly in front of Congress. Now, the cockroaches at the IRS are scurrying away from the light produced by testimony like this.

In Wetumpka, we are patriotic Americans. We peacefully assemble. We petition our government. We exercise the right to free speech. And we don’t understand why the government tried to stop us.

“I’m not here as a serf or a vassal. I’m not begging my lords for mercy. I’m a born free American woman. Wife, mother, and citizen. And I’m telling my government that you’ve forgotten your place. It’s not your responsibility to look out for my wellbeing and to monitor my speech. It’s not your right to assert an agenda. Your post, the post that you occupy, exists to preserve American liberty. You’ve sworn to perform that duty, and you have faltered…

“What the government did to our little group in Wetumpka, Alabama is un-American. It isn’t a matter of firing or arresting individuals. The individuals who sought to intimidate us were acting as they thought they should, in a government culture that has little respect for its citizens. Many of the agents and agencies of the federal government do not understand that they are servants of the people. They think they are our masters. And they are mistaken.

“I’m not interested in scoring political points. I want to protect and preserve the America that I grew up in. The America that people crossed oceans and risked their lives to become a part of. And I’m terrified it is slipping away.

Placing a couple of people on leave and making some empty promises about reform isn’t good enough this time. Everyone involved in this from top to bottom has to go down in a heap. Anything less than that is completely unacceptable and if that means criminal charges and putting some of these people in jail, just like the IRS does to us if we don’t pay our taxes, then that’s just fine.