Children with Cancer Lose Coverage Because Of Obamacare. Community Raises Money For Chemotherapy. 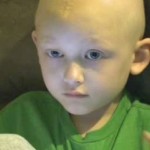 A Gainesville family is fighting for their childrens’ lives. Ronald and Krista Alford’s two children, Hunter and Mikayla, were born with extremely rare types of cancer. Now, seven years into fighting that battle, they’ve been hit with a new one: their children’s insurance has been cancelled, affecting Hunter’s chemotherapy. News 12’s Allison Harris brings us their story of struggle and strength. Hunter Alford is due for his next round of chemo. As of right now, his mom Krista says, he’s unlikely to get it.

“Since his insurance was dropped, we’re thinking about cancelling his chemotherapy,” Krista Alford said.

The 7-year-old, who loves playing games on his iPad, is reportedly the youngest person to have his type of cancer. Hunter has Plexiform Hishocyne Neoplasm. The Alford’s are in a battle with children’s medicaid — or CHIP — Hunter’s insurance. Krista says, despite receiving a new, renewed insurance card, the agency told her they dropped his insurance. “I called them and they said we were dropped October 31st,” Krista said. Krista says an insurance agent told her that Hunter’s information got lost when they made changes under the new Affordable Care Act. Now, Krista is on a mission to re-gain that insurance, but they’re running out of time before his next chemo treatment, and the agent says they can’t expedite.

“The lady’s like, the only way we can expedite is if your son was pregnant and in labor, or if he was an illegal,” Krista said.

Hunter’s chemo would cost $50,000 without insurance. For now, the Gainesville community is pulling together, raising money to pay for Hunter’s chemo.

Want to know why conservatives are fighting so hard to repeal Obamacare? It’s because we’re trying to save kids like Hunter and Mikayla Alford while liberals are content to watch them die.