Pope Francis, the Christianic Marxist[1], quoted a fourth century bishop and called the unfettered pursuit of money “the dung of the devil,” and said poor countries should not be reduced to being providers of raw material and cheap labor for developed countries. Actually, when I heard the original quote, it said ‘capitalism’ not ‘money.’ While seeking unlimited riches can be a sin, it is not always so and not all wealthy people are guilty of this sin. It is also true that poor countries should not be treated as merely sources of materials and labor, however, those countries also benefit from that part of the economy. Countries are free to prosper and if more lived under free capitalistic governments where free trade was the norm and people were allowed to innovate and work for themselves, then there would be far fewer impoverished countries. But first, you’d have to get rid of the Marxists and dictators. Kind of a conundrum. 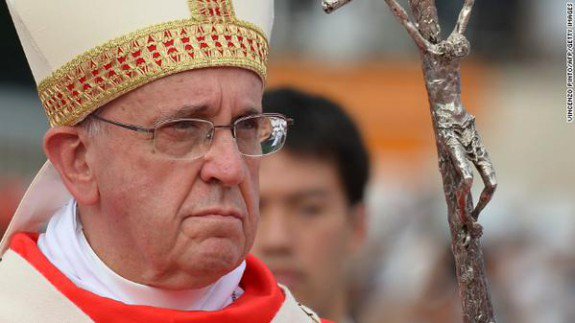 God, please save your Church from this ignorant lunatic.

Red Francis blasted global capitalism in his speeches this week in Latin America.

The Communist pope called capitalism the “dung of the devil.”

The Communist in the Vatican is the one pushing the devil’s dung.

Capitalism has lifted 500 million dirt poor human beings out of poverty in the last 20 years!

This crazy Pope has it all wrong.

His speeches can blend biblical fury with apocalyptic doom. Pope Francis does not just criticize the excesses of global capitalism. He compares them to the “dung of the devil.” He does not simply argue that systemic “greed for money” is a bad thing. He calls it a “subtle dictatorship” that “condemns and enslaves men and women.”

Having returned to his native Latin America, Francis has renewed his left-leaning critiques on the inequalities of capitalism, describing it as an underlying cause of global injustice, and a prime cause of climate change. Francis escalated that line last week when he made a historic apology for the crimes of the Roman Catholic Church during the period of Spanish colonialism — even as he called for a global movement against a “new colonialism” rooted in an inequitable economic order.

The Argentine pope seemed to be asking for a social revolution.

“This is not theology as usual; this is him shouting from the mountaintop,” said Stephen F. Schneck, the director of the Institute for Policy Research and Catholic studies at Catholic University of America in Washington.

Yes, he’s shouting from the mountaintop[5] – he’s shouting Liberation Theology and straight up Marxism. The Pope is beginning to remind me a lot of the False Prophet in Revelations these days. Under the communism he pushes, hundreds of millions have died. Capitalism has saved millions of lives and elevated many out of stark poverty and into lives that are fulfilling, worthwhile and livable. But Red Francis is coming out for things that are strictly Marxist and not Christian in the least. Wealth redistribution and a UN one world government/religion are among those things he is for. Along with Climate Change fascism. His proclamations echo Barack Obama and communism. He uses Mother Earth as a handy excuse and he is targeting for blame the engines of free enterprise, using language meant to equate it with greed, while overlooking the primary source of real greed: corrupt totalitarian governments, born of Marxism. If you follow this pied piper, you will find yourself in the loving embrace of the UN – that Democracy of Dictators[6] – and all that entails.