If you see a Methodist church get hit by lightning, this may explain why:

United Methodist Church bishop Dr. Karen Oliveto is not only a lesbian, she also believes (and publicly teaches) that Jesus was a bigot filled with prejudices. She does say that Jesus grew and changed, and that’s her point. Bishop Oliveto admonishes, “If Jesus can change, if he can give up his bigotries and prejudices, if he can realize that he had made his life too small, and if, in this realization, he grew closer to others and closer to God, than so can we.”

The United Methodist Church has been on the descent into apostasy for years now. While the denomination is currently in the midst of their 75 weeks of praying about accepting homosexuality, they have long allowed pastors of their churches to go against their current beliefs on the matter. In 2005, Karen Oliveto, a non-celibate lesbian, officiated several same-sex marriages that were held in the United Methodist church she pastored.

Oliveto’s teachings cover the range of normal progressive “Christian” beliefs — the denial of the exclusivity of the Christian faith and the denial of the authority of the Bible, to name two. However, it’s her direct attack on certain Bible passages and Biblical figures that has caused some within the UMC to be concerned.

Any remaining Christians in the Methodist community must be starting to realize that they are the victims of a bait and switch.

If Jesus was imperfect, if he was bigoted and unloving, there is very little reason to listen to what he had to say or to look to him for salvation. Frankly, that’s probably exactly what Oliveto is moving toward — a complete discarding of Jesus and the Bible altogether.

You can only worship one god at a time. If the people in control of the United Methodist Church did not worship moonbattery, they would not allow blasphemous degenerates like Karen Oliveto to become bishops. The objective is to hollow out Christianity, leaving only the outer shell but replacing the insides with leftist ideology. 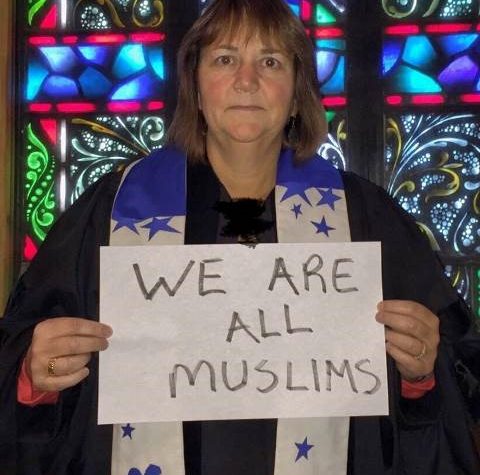 This blasphemous, perverted moonbat is a bishop.